Pop-Up Commentary on “Teaching the Relative and Ultimate Truths”

At the end of Dzongsar Khyentse Rinpoche’s teaching events in Australia in August 2017, 84000 and Siddhartha’s Intent Australia hosted a “sūtra resounding” led by Rinpoche. The approximately 500 participants were asked to select and read aloud a text from the recently published sūtras in the 84000 online Reading Room. Hard copies of the texts were distributed to Rinpoche and the monastics, and it so happened that Rinpoche was given Teaching the Relative and Ultimate Truths. 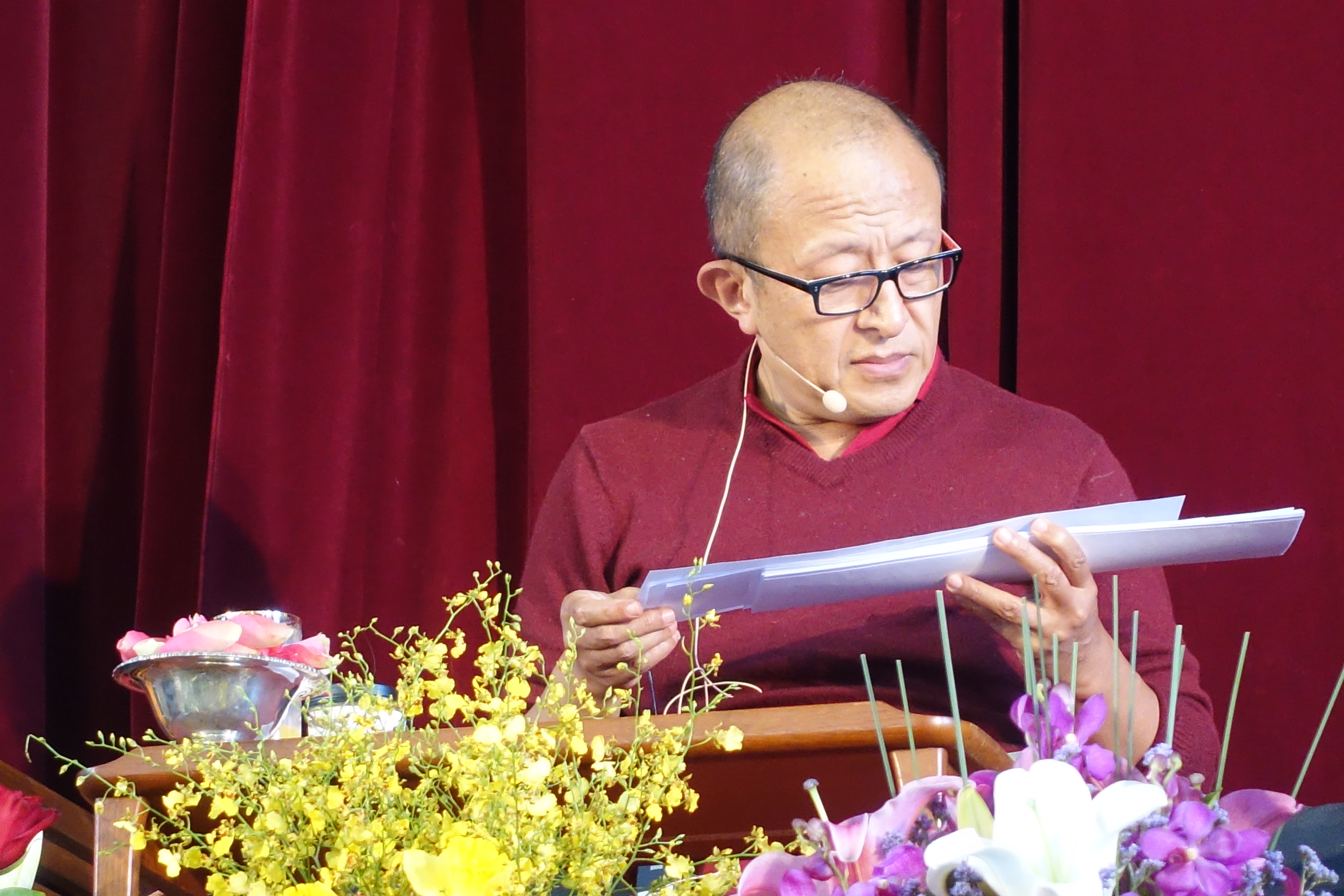 Teaching the Relative and Ultimate Truths is a sūtra in which, as explained in the 84000 Summary, the bodhisattva Mañjuśrī is summoned by Buddha Śākyamuni from a distant buddha field to teach in a way that dismantles all dualistic experience. As Mañjuśrī begins to teach, it is clear that the underlying message of the sūtra is an explanation of the two truths.

Moved by the few stanzas he was reading, Rinpoche somewhat abruptly ended the resounding by saying about the text in his hands, “I’m just reading this [Teaching the Relative and Ultimate Truths]. It’s just so beautiful!” In his own words, Rinpoche then proceeded to describe the few pages he had just read. Below is the transcript of Rinpoche’s impromptu summary and reflection of the first few pages of the Teaching the Relative and Ultimate Truths.

Buddha was in Vulture’s Peak. There were so many disciples. And one of the young gods, heavenly beings, offered prostrations to the Buddha and said, “Where is Manjushri? I don’t see him here. I want to talk to him.”

Then the divine being, the boy, said, “Well, I really want to see him. Because apart from you, Shakyamuni Buddha, only Manjushri makes sense when he teaches. Only when Manjushri speaks does the palace of demons shake [and do] the voices of the demons become hushed, subside. And most of all, only Manjushri speaks in a way that has no ground – all the other teachings seem to have a ground where we end up settling. And when he speaks, that makes us appreciate you, Shakyamuni, even more.”

Then Shakyamuni Buddha sent a light from his forehead – there’s a hair [between the eyes], you know, a white hair from where he sent a light. And this light, quicker than the movement of your fingers snapping, reached the other city. And the light illuminated the Layer of the Jewels Buddhafield.

There in the Layer of the Jewels Buddhafield, the bodhisattvas were so amazed, “What is this light?”

The Tip of the Jewel Buddha said, “From here, on the west side, 18,000 buddhafields beyond, there is a buddhafield called ‘Fearless Buddhafield’” – which is this earth.

“And there is a Buddha called Shakyamuni, and he sent this light.”

The disciples asked him, “For what?”

“To summon Manjushri.” Then the Tip of the Jewel Buddha turned to Manjushri and said, “Time to go!”

And then Manjushri took 10,000 bodhisattvas as his attendants. They prostrated to Tip of the Jewel Buddha and circumambulated him three times before leaving for the Fearless Buddhafield.

Then Manjushri and the 10,000 bodhisattvas arrived quicker than when your thumb and your index finger can make a movement.

First, they decided to be invisible in the sky. They brought lots of very special flowers that the Fearless Buddhafield had never seen before and showered them where Buddha Shakyamuni was sitting. Until the flowers reached knee level, the shower never stopped – the shower of flowers!

Then all the disciples said, “We want to see him! We have a longing to see him!”

Then, at the moment they said this, Manjushri and the 10,000 bodhisattvas came and did prostrations at Sakyamuni Buddha’s feet and circumambulated three times and sat.

And then Sakyamuni Buddha told the divine young boy, “Okay, now you ask Manjushri what you want to ask.”

And then the divine boy asked Manjushri, “So, what were you talking about?”

Manjushri said, “Oh, yes, I was talking with the Tip of the Jewel Buddha. We were just talking about how we invented the idea of relative and ultimate truth only for the sake of conversation. There is no such thing as ultimate truth and relative truth.”

That’s how the Mahayāna sūtra of Relative Truth and Ultimate Truth came about.

Call for commentaries on 84000 sūtras: please let us know if your qualified teacher or scholar has offered a commentary specifically on any of 84000’s published sūtras. info@84000.co