Deeply involved for a long time in the study and practice of Tibetan Buddhism, Mike Engle has become one of the key figures working behind the scenes in 84000. His interest in the texts and in their translation, his quick grasp of the possibilities of technology, and his cheerful ease communicating with people have make him the ideal person to manage the publication and markup stages, where the editorial, technology, and communications teams all interface. Since joining us formally in 2016, Mike has transformed our initial, painstakingly slow, manual method of markup into a rapid and efficient process, now mostly automated, and coordinates a small and friendly team of markup editors who make sure that all the fine detail is in place. He has also planned and realized all kinds of tools to allow copyeditors, editors, and translators to communicate with each other and keep accessible their ever-growing knowhow. In particular, a still evolving set of tools for translators is quickly taking shape under his nurturing supervision. Mike’s dedication, his skills, and his imaginative, positive thinking are a huge asset for the project as a whole. 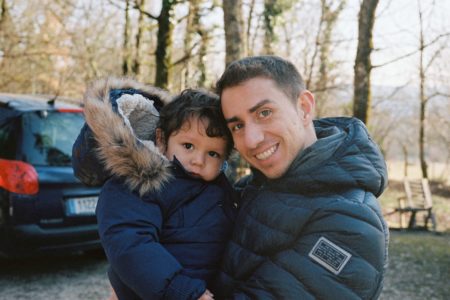 When I was a child, my family was acquainted with the Tibetan community living in Boulder, Colorado. I remember the Losar parties that we would have at our house. Especially the momos. Even though we were around Tibetans, that didn’t mean we were interested in Buddhism. However, my father had studied Buddhism for a long time, and he would offer opportunities to see if I would become interested in Dharma. It wasn’t until I was a teenager that it really caught on. I remember when we had our pivotal conversation about meditation. We were driving somewhere, and my dad started a conversation with me.

“Have you ever noticed how your mind has thoughts constantly running through it and your attention is always jumping around from one thing to another?” my dad asked me as we drove.

“Yeah, I have noticed that. It’s totally out of control, and it’s kind of annoying,” I replied.

“Well, they call that the monkey mind and it can be trained. You can learn how to quiet the mind and keep your attention still. That’s what meditation practice is all about. Would you be interested in learning how to do that?” he asked me.

“Sure, I guess,” I said quietly, not really aware of what I was getting myself into. After that I went to my first teachings, and from then on I was hooked. I deeply resonated with idea of training my own mind for the benefit of others and I have been moving in that direction ever since.

I studied and practiced on my own for a while, and finally went to live in Nepal for a year. After that I continued studying and practicing for a few years in France, and was very interested in becoming a translator. So, I started to translate, but soon I realized that I would run out of money if I didn’t find some other work. Unfortunately, translators of Tibetan don’t make that much money. Around that time my wife became pregnant and I decided to let go of my dream of translating in order to find some other work to support my family. I remember talking to a friend who was a professional translator, and he suggested to me to get into publishing. That way I could still be involved in the process of making the Dharma available to the world, just at another stage in the process (and one that is often better compensated).

Fortunately, around that time I began doing some small editing jobs for 84000. At one point I was offered a position marking up the translations so they could be published online. For those of you who don’t know the process, 84000 translations go through a long lifespan before you can find them in the Reading Room. Most translators write their translations in Word, and there is a long review/editorial process that can take months. Afterwards, the texts are sent for markup, where we take them from the Word format and convert them into a markup language called XML. We prepare the texts in a way that they are easily searchable and accessible by the different technologies that we use to publish them. From that one XML version, we’re able to create HTML, PDFs, and ePUBS (and more). After working on marking up texts for a while, I was asked to create a new team of markup editors and create a stable workflow process so that we took less time and effort to mark up each translation.

As I worked in this capacity, there was always discussion about the different interesting things we could do with the markup of the texts. For example, if we mark the location of every sutra, then in the future someone could map out where each sutra takes place. We we’re thinking about how we could facilitate future research or study of the texts, and I wondered what the translators would find useful. In 2017, the Tsadra Foundation hosted a translator conference in Boulder, and I went to speak to a handful of translators who were working on 84000 texts. My main purpose was to ask: what do you guys need? What do you feel is lacking? How can 84000 support you better? It was wonderful to meet some of the translators face to face and I walked away from the conference with a ton of ideas about how we could help.

Since then we’ve been able to manifest different ways to help our translators, the foremost being an online Translator Tools site that offers a variety of different resources and support that 84000 translators can use in their work. We also developed translation memory files for all of our published translations. This is very exciting, because it creates the possibility for collaboration in a way that we’ve never seen before. A translation memory file is basically a way of matching segments in Tibetan to their English translations. Once enough of these segment matches are created, you get a database full of interesting information. Now we’ve developed a tool where a translator can pull up their text in the Kangyur, highlight a word or phrase in Tibetan, and then search the 84000 database for matches. The search returns any instance of that word/phrase in any of our published translations. This way translators can see exactly how other translators made sense of those phrases and how they translated them. They can also see any instance that appears in any of the 84000 glossaries. Our hope is that this can build out more and more and create conversation and collaboration amongst the 84000 translators as they work on their translations.

We’re also doing our best to create the translator community in collaboration with the translators. We don’t just want to make guesses about what they need and then do it from the top down, we want to work with them to develop tools and resources that help them. Hopefully as time goes on we can do this more and develop a community where 84000 translators work in collaboration across the globe.

I love to see everyone working together as a team to offer the Dharma freely to the world. I’m so inspired by 84000’s vision to do this, and I feel incredibly fortunate to be part of the team. I love the organization and the people I get to work with every day. I know I’m just playing a small role in the organization, but I hope that some of the wheels we’ve set in motion can support 84000’s mission for many years to come.