All of us at 84000 were very sad to learn that our dear friend and colleague Steven Goodman, one of the founding members of 84000’s Working Committee, died in the afternoon of Monday, 3 August, at the age of 75. 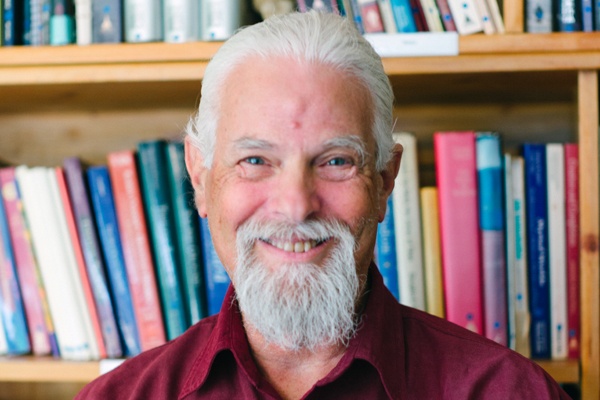 Steven had been diagnosed with a rare blood disorder, and spent his final days and hours at his home in Oakland, California, in the presence of his wife, Joan, and his son, Matthew, to whom we offer all our condolences and prayers.

Many of his friends were taken by surprise by this news, but it was perhaps very characteristic of Steven that he seems to have preferred privacy and discretion in his terminal illness. He was by no means a recluse—on the contrary, he was an outgoing, social and very communicative person—but he would not have seen his own state of health as a concern that others needed to be burdened by. 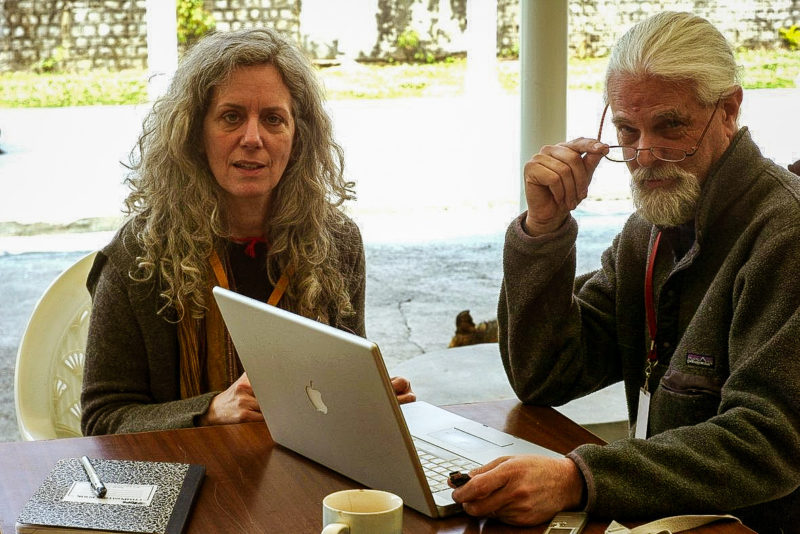 Steven, a quintessential Californian, was one of the first of a generation of committed Buddhist practitioners who were also academics participating fully in Western, university-based scholarship.

The eldest son of a doctor and UCLA professor of public health, Steven grew up in Beverly Hills and attended Fairfax High School. He once described how his father used to take him out on emergency calls, giving him an early awareness of sickness, aging, and death.

He was an undergraduate student at the University of California, Berkeley, in the heady days of the late sixties. From Berkeley, he went to study at the University of Saskatchewan, Canada, under the pioneering Buddhist scholar Herbert Guenther, living in Saskatoon for eight years in the seventies. One of his first published articles was an account of the great Mipham and of an important text he wrote, The Gateway to Knowledge (mkhas ’jug). In particular, it was under Guenther’s influence that his lifelong commitment to and study of the Great Perfection teachings, and in particular the Longchen Nyingthik tradition, gathered pace; and it was there, too, that he met his wife, Joan Marie Wood. By 1983 they had settled in Oakland, California, and he received his PhD in Far Eastern Studies from Saskatchewan in 1984. 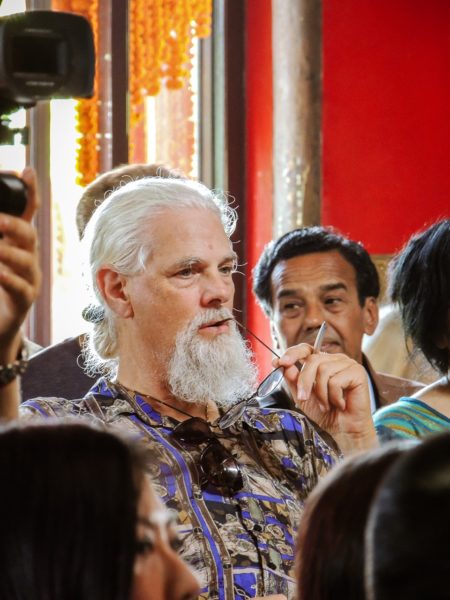 In the early 1990s, while Professor of Tibetan Studies at the Institute of Buddhist Studies in Berekeley, he was co-editor with Ronald Davidson of  Tibetan Buddhism: Reason and Revelation (SUNY Press, 1992), a pioneering source book for the study of primary Tibetan philosophical and visionary literature. Among the eight studies in the book by other scholars (including Herbert Guenther, Kennard Lipman, Karen Lang, Matthew Kapstein, and Janet Gyatso) was Steven’s own carefully researched presentation of Jigme Lingpa and the Longchen Nyingthik.

In 1994, Steven was awarded a Rockefeller Fellowship at Rice University Center for Cultural Studies for the study of Tibetan mystical poetry (nyams mgur), and around the same time he authored the chapter “Transforming the Causes of Suffering,” in Mindfulness in Meaningful Work (Parallax Press, 1994).

For many years until the end of his life he was Associate Professor and Concentration Chair at the California Institute of Integral Studies (CIIS) in San Francisco. He was Research and Program Director for Asian and Comparative Studies in the Philosophy and Religion Department’s School of Consciousness and Transformation, with research interests in Indo-Tibetan philosophy, Tibetan poetics, and the classical Tibetan language. Over the years he was also a guest lecturer on Buddhist philosophy and comparative religion at the University of California at Berkeley and Santa Barbara, Rice University, Temple University, the Graduate Theological Union, the Nyingma Institute, and Naropa University; and he led study groups and facilitated workshops in Europe, Asia, and the United States on Buddhist practice, working with trauma, and so on. He was also a contributor to Tibetan Literary Arts (Marit Cranmer, curator, Shang Shung Institute/Smith College, 2007).

His latest book was published in July, only two weeks before he died: The Buddhist Psychology of Awakening, Shambhala (2020). In it, Steven presents a practical guide to studying and understanding the Abhidharma system, the fruit of his decades of teaching.

His natural curiosity led him into all sorts of cultural, intellectual, and artistic fields, and as a teacher he used his eclectic knowledge to weave bright webs of interconnected ideas around whatever topic he spoke on. Yet his brilliance and wit were by no means talents he used just to impress; they were infectious, he made other people feel empowered to join in, and the underlying theme was always to communicate Buddhist ideas and attitudes. He had an uncanny, perceptive ability to engage his students, inspire them, encourage them, and guide them to explore for themselves. Above all they—like everyone else—so enjoyed his company that learning almost seemed to happen by itself, as an effortless by-product.

Some of these qualities may have been innate in Steven, but they also bear witness to how much he discovered in the Buddhist traditions he cared so much about, as a student and practitioner. In parallel to his academic work, he had studied and practiced in the late seventies and early eighties with Chogyam Trungpa Rinpoche and the great Amdo teacher Gonpo Tseten, and later with Namkhai Norbu Rinpoche, Bhaka Tulku, Tenzin Wangyal, Dilgo Khyentse Rinpoche, Thinley Norbu Rinpoche, Lama Tharchin, and Khenpo Namdrol. He was not himself an oral translator, but was frequently present as translation adviser and text consultant at teachings by these and other teachers.

His closest association of all, particularly in more recent years, was with Dzongsar Khyentse Rinpoche. His instantly recognizable presence was a constant feature of Rinpoche’s teachings and events, and he took on responsibilities in many areas of the work of Siddhartha’s Intent and the Khyentse Foundation. He was a member of the Foundation’s Academic Development Committee, the Grants Review Committee, and the Endowed Chair in Buddhist Studies working group. 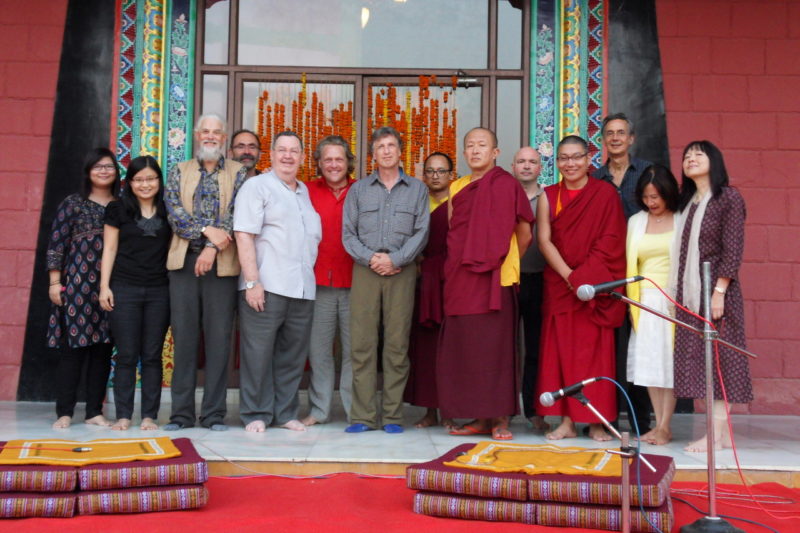 Most significantly for 84000, he was on the Program Advisory Committee for the historic 2009 Translators’ Conference at Deer Park Institute in Bir, where the project was conceived. Gene Smith of TBRC—the great scholar who had, uniquely, twice in his life played a major role in the preservation of Tibetan literature—was a prime mover in the idea, and had known Steven for many years. Steven was such a trusted link between Khyentse Rinpoche, the Khyentse Foundation, and the world of translation and academic Buddhist studies that it was only natural for him to be present at the initial planning meeting, in September 2009 in Los Angeles. 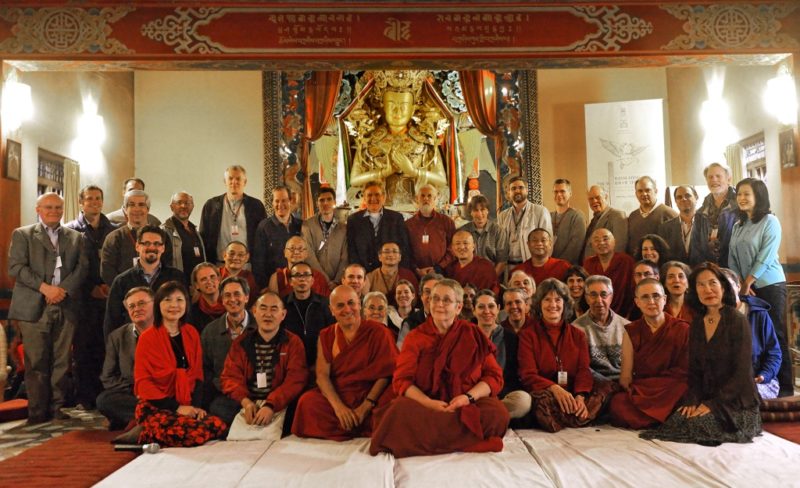 There, the first Working Committee was formed for the project under its initial name, the Buddhist Literary Heritage Project (BLHP), later to become 84000: Translating the Words of the Buddha. Steven’s ideas, support, and wide contacts were an important ingredient in the founding mix. His particular role was to manage the compiling of the tools and resources that were so vital to the work of translating and editing the canonical texts, a job he took on energetically and making full use of the resources he knew well through his academic work. 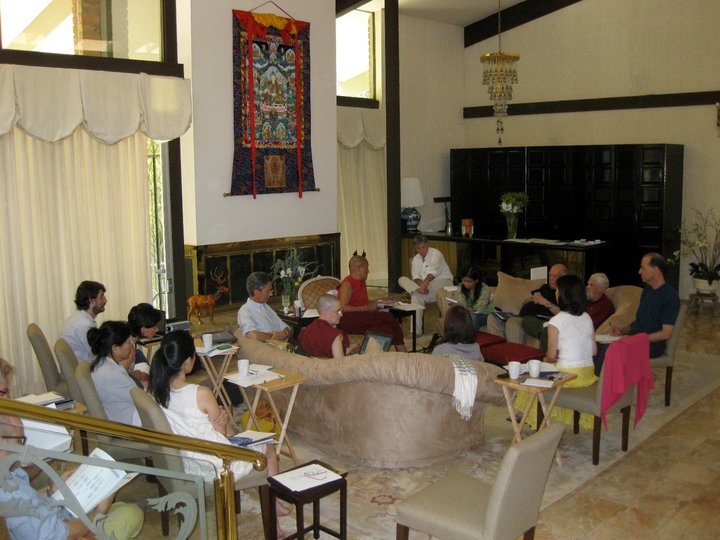 In recent years, Steven’s health no longer allowed him to travel easily, and we saw him less often at meetings of the committee; he formally stepped down from it in 2018 but continued to follow progress and to make himself available when needed. 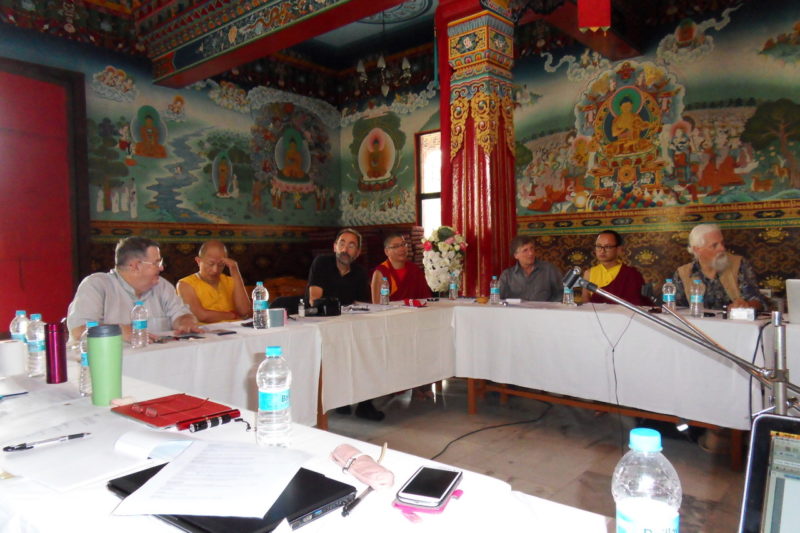 I last saw him myself during a visit to the Bay Area in October last year. Over an extended lunch at one of his favorite spots, Aunt Mary’s Café in Oakland, we talked for three or four hours about 84000, the texts, people we knew, Steven’s forthcoming book, and everything under the sun. He was as sparkling and entertaining as ever, but I noticed a slight new physical frailty. He had touched briefly on his uncertain prognosis, and as we said goodbye and he walked slowly from the car to his front steps, I had the thought that I might not see him again.

Steven was immensely likable. Above all, he was a people person. He did some respected research, and he wrote articles about it. But his huge influence lay, rather, in the personal interactions he had with students, colleagues, friends, and everyone he met. I have heard so many people say, “Steven was so helpful to me when I was …,” or “It was Steven who inspired me to …” Whenever his unmistakable figure appeared at some gathering or event, you couldn’t help feeling pleased to see him. His wit and wisdom, his kindness and concern, his lightness and his deep understanding, and his colorful, slightly bohemian elegance will be sorely missed.

Here, we’d also like to share a tribute to Steven Goodman by our Founding Chair, Dzongsar Khyentse Rinpoche.