Robert Thurman on The Sūtra of the Teaching of Vimalakīrti

Recently 84000 had the opportunity to interview Sūtra of the Teaching of Vimalakīrti translator Robert A. F. Thurman. Find out what he has to say about the first request for him to translate the Vimalakīrti sūtra, the impact of the subsequent discovery of its Sanskrit edition, the importance of the sūtra for those interested in Buddhism, and the 84000 effort to translate the Kangyur and Tengyur. 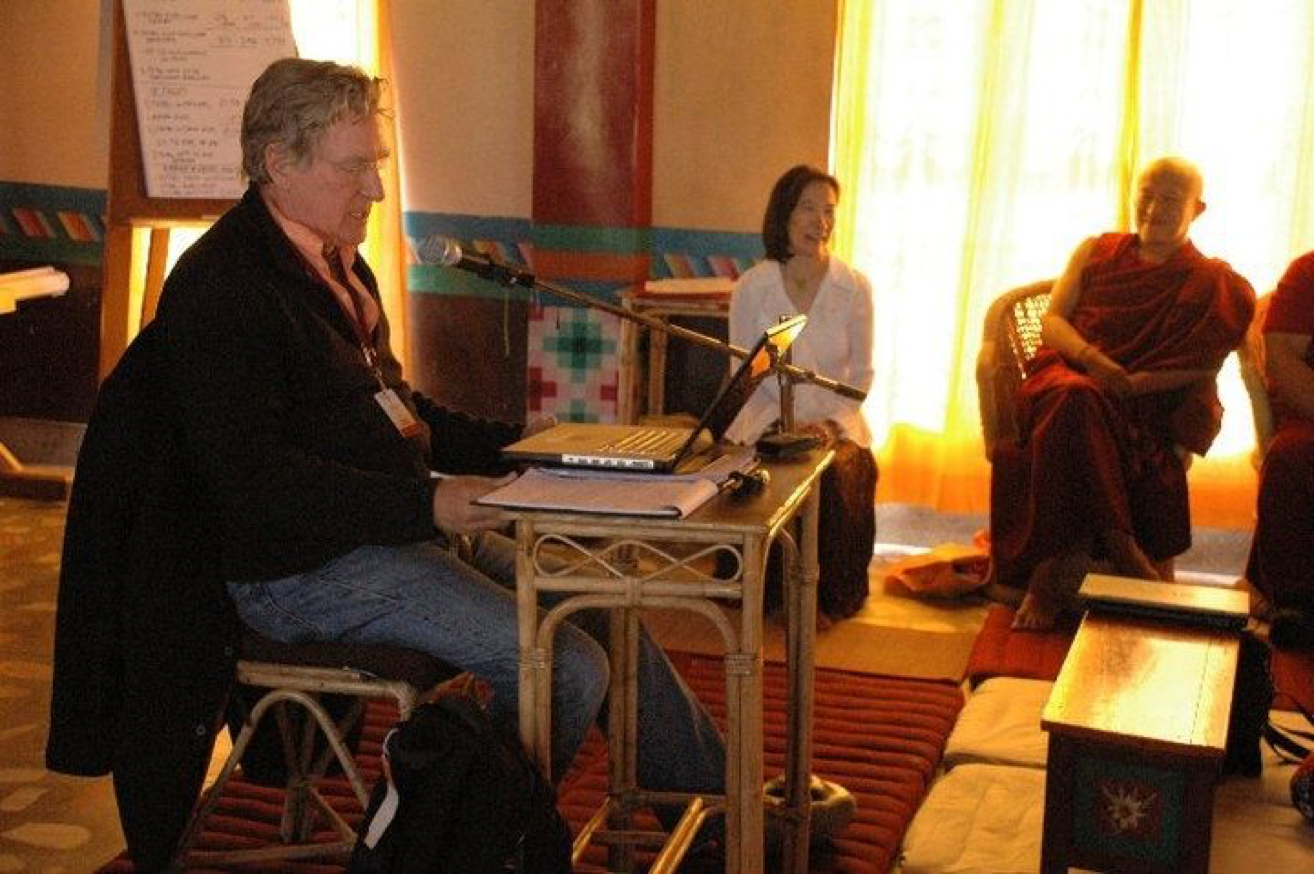 Thurman speaking to the participants of the Khyentse Foundation’s Translating the Words of the Buddha conference in 2009.

The Vimalakīrti Sūtra seems to have been a passion of yours for decades, since you first published it in 1976. How did that come to be?

Robert Thurman: I was commissioned to do a new translation by Mr. C. T. Shen, when I was fresh out of grad school, though he might have preferred me to merely edit an earlier Robinson translation of the Kumārajīva translation from their Chinese. Chinese Buddhists love the Kumārajīva [version], but I preferred the Xuanzang version, which is really close to the Tibetan, and the Sanskrit which was discovered only lately.

I fell in love with the wonderful sūtra, so useful in teaching introduction to Mahāyāna Buddhism.

*84000 Note: The Kumārajīva version (406AD) was one of six Chinese translations of the Sūtra of the Teaching of Vimalakīrti 維摩詰所說經 before Xuanzang’s (650 AD), and remains the most popular version in Chinese. Richard Robinson was one of the first to translate the text from the Kumārajīva version from Chinese into English (though that translation was not formally published), and Thurman was the first to translate the text from Tibetan into English in the 1970s. – from Dan Lusthaus’ Buddhist Phenomenology: A Philosophical Investigation of Yogacara Buddhism and the Ch’eng Wei-shih lun, p.563.

You write in the Introduction to the 84000 edition that thirty years after you published the first translation a Sanskrit text of the sūtra was found. Did that version have any significant impact on this most recent translation? Are there many differences, aside from editorial ones, between the translation you published in 1976 and the one being released today? Has your decades long immersion in Buddhist studies changed your interpretation of the text and influenced the most recent translation?

Some terminological changes I was happy to make in the 84000 version, with the kind assistance of John Canti. I think the Sanskrit is very close to the Tibetan, and so [there was] not a great deal of disconfirmation. Sometimes even, the Tibetan is clearer than the Sanskrit. My interpretation has only gotten richer and more delighted over the years, and I’m pleased that, though I was too young to understand somethings in it, I still intuitively got the words okay. When it was first published in 1976, though I finished it in 1973-4, I gave a copy to my root teacher, the late Venerable Geshe Wangyal, to put in his monastery library, as he wouldn’t read the English version. He kept saying to me, “Oh, good, you’re beginning to study this text!” I kept saying, “No, Geshe-la, I translated it.” And he would say, “Yes, you’re beginning to study it!” I got his point, and it has gone deeper and deeper over the decades since – he was always so prophetic.

You also mention in the Acknowledgements section of the 84000 edition that you intend to publish yet another edition of the first translation in the future. How would that differ from the editions that have preceded it?

I’m not sure, but I may have some new inspirations when I go over it yet again, as the press wants me to.

Do you have anything you’d like to say about 84000’s effort to translate the Kangyur and Tengyur into modern languages?

I like their effort very much. I was present at the inception of the project at [the Khyentse Foundation “Translating the Words of the Buddha”] conference in Bir, and I was a bit sad not to be able to help more. I stated my intention to give my Vimalakīrti translation to the effort if needed, and am very happy it has now happened. At the time, it was understood that my charge in 1972 from Geshe Wangyal-la and HH Dalai Lama was to set things up to translate the Tengyur in particular, which we are doing at a glacial pace (they said it would take me three lifetimes, at least). So I am delighted 84000 is focused on the Kangyur, and will be very happy if they undertake some Tengyur works in the future as well. Our Tengyur works are conventionally published in an academic press, but that may expand in the future, if more collaboration develops.

I think it is such a great sūtra, so beloved for thousands of years by millions of people, introducing them to Prajñāpāramitā sūtra teachings, Buddha-Avatamsaka sūtra teachings, Pure Land teachings, Jewel Heap sūtra collection teachings, and even, tangentially, to the esoteric teachings. I am delighted that more people around the world will get to meet Vimalakīrti and Mañjuśrī in dialogue by way of the 84000 online publication! Thanks to John Canti, and of course, to Dzongsar Khyentse Rinpoche.

Robert A. F. Thurman is the Jey Tsong Khapa Professor of Indo-Tibetan Buddhist Studies in the Department of Religion at Columbia University, President of the Tibet House U.S., a nonprofit organization dedicated to the preservation and promotion of Tibetan civilization, and President of the American Institute of Buddhist Studies, a non-profit affiliated with the Center for Buddhist Studies at Columbia University and dedicated to the publication of translations of important artistic and scientific treatises from the Tibetan Tengyur.