Questions for a Not-So-Old Lady

Yangchen Dolkar Tsatultsang first started translating with 84000 after a completing a two-year translation program at the International Buddhist Academy (IBA). Now that she’s completed her program, she’s committed to translating all sūtras into English so that Tibetans, and others, can read the original words of the Buddha whether they speak Tibetan or not. Here she shares her experience with her first successful translation with 84000, The Questions of an Old Lady.

Translating the Words of the Buddha: What inspired you to be involved in sūtra translation?

Yangchen Dolkar Tsatultsang: I was interested in learning about the words that Buddha actually spoke, instead of just reading commentaries about them. I wanted to hear the words of the Buddha that he actually spoke. That’s the main reason.

I got involved in 84000 after I did a two-year translation course at the IBA (International Buddhist Academy). After that, Khenpo Jorden (the Principal of IBA) thought it would be good for all the students who were interested to take part in this 84000 sūtra translation project. So he organized us in pairs—one monk-scholar and one lay person—and he gave us different sūtras to translate.

When Khenpo Jorden gave us various sūtras to translate, the sūtra he chose for me was called The Questions of an Old Lady. Since I was old (laughs) and a woman, I thought he was kind of teasing me, but of course it wasn’t like that. What I didn’t realise was that there are not that many women translating, and particularly there are no Tibetan women translating. I think I was the only one, so I felt very fortunate. I felt very fortunate and very blessed to be able to do this after I completed the translation. And I really feel that this has been in a way my life’s work because it was more important to me than anything else.

The sūtra I translated is about an old woman who is a very poor old woman, who is cutting grass in Vaiśālī when she meets the Buddha. And then she asks the Buddha some very profound questions and the Buddha answers her questions. It was amazing that she—a poor old woman!—was able to ask such questions. Well, to cut the long story short, a couple of years later, I was on a pilgrimage with the Sakya Trizin and His Holiness’s attendants and family, and we stopped by Vaiśālī. As I was just going around, there were a lot of people cutting grass. Then I saw this very old woman with white hair, in a white sari, cutting grass! And suddenly my translation came back to me! I thought, “Oh wow this is auspicious. There is an old woman cutting grass in Vaiśālī.” You know how coincidental can that be. So I felt really happy and I thought there was some kind of auspiciousness about that and some kind of connection. I felt very blessed.

What challenges did you face in translating and how did you deal with them?

Oh we faced many challenges, absolutely, because we were a group of new translators. We had to be careful not to make too loose a translation and also, as I said, we were beginners, so we had to work very hard. And after we did the initial draft, we had to send it to the editors who returned it back with lots of red marks. We edited it and re-edited it, and finally, with it being more or less right, they accepted the translation. So it was difficult, although the sūtra I translated is a very short one.

84000: Could you describe the process of translation with you and the monk-scholar? What was the process like?

How do you feel about this work after going through the process of translation?

Oh I think it’s wonderful. I think is wonderful because, in my situation, I’m a Tibetan but my Tibetan wasn’t good enough to be able to read the sūtras with ease—whereas my written English is much better. So it’s wonderful especially for the new generation of Tibetans whose classical Tibetan may not be very good. Because Tibetans are now spread all over the world, the young people are growing up without access to classical Tibetan. They live in foreign countries and they have to deal with the education provided to them in the foreign countries. But a lot of them are in English-speaking places, so in this way, all the sūtras will finally be accessible to them in a language they can read and hopefully understand. I’m speaking for all Tibetans, and it’s true for myself, too (laughs)!

I would like for all young Tibetans to take interest in the sūtras and be able to read them. Many of them are very short. And that should inspire them to study the dharma. And like I said, these are the words of the Buddha himself, not the words of some common somebody writing a commentary. They may have to first read the sūtra, and then when their interest awakens they can go on to read the commentary. But the sūtras are written in a much simpler way. Commentaries are much more complicated. So it is a good way to inspire them to read the words of the Buddha first-hand. 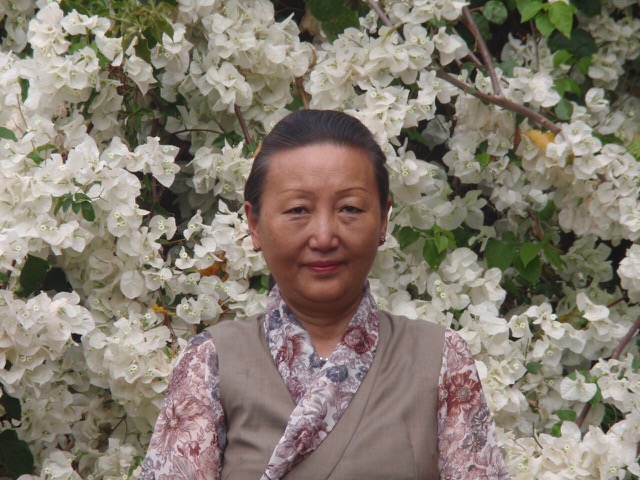 Yangchen Dolkar Tsatultsang, also known as YangDol, was born in Kalimpong, India, in the Year of the Metal Rabbit, 1951. After spending much of her youth with her family in Tibet, she returned to India to be educated in Catholic/ missionary schools, which paved the way for her to attend university in England. Eventually, YangDol made her way back to the Himalayas, where she has since dedicated herself to Buddhist study and translation. She studied Buddhist philosophy for several years at Rangjung Yeshe Institute in Kathmandu and later completed a two-year translation course at the International Buddhist Academy (IBA). It was here that she encountered and partnered with the members of the translation team at IBA, under the guidance of Khenpo Jordhen.