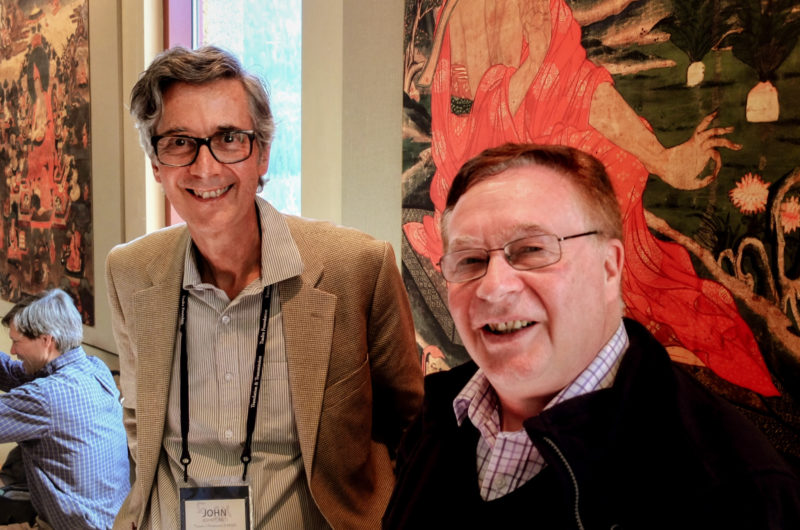 84000 Editorial Co-Director, John Canti with Gyurme Dorje at the 2009 Translating the Words of the Buddha Conference in Bir, India.

One of our most expert and productive translators, Dr. Gyurme Dorje, passed away in February, in hospital in Dundee, Scotland. Although it is with great sadness that we announce his death, his life, personal qualities, and achievements as a translator and scholar are to be celebrated. Gyurme Dorje was present at the 2009 Bir conference from which 84000 first evolved, and was an enthusiastic contributor to the planning of the project. Furthermore, Gyurme’s work for 84000, under the aegis of the Padmakara Translation Group, has been on two of the major Prajñāpāramitā sūtras, “The Transcendent Perfection of Wisdom in Ten Thousand Lines” (Toh 11), published in 2018, and the still unpublished “The Transcendent Perfection of Wisdom in Twenty-five Thousand Lines” (Toh 9). These two massive works alone occupy no less than four-and-a-half volumes of the Kangyur. Both texts are extremely dense in technical terms and difficult language, and to translate them Gyurme drew on his deep knowledge of Buddhist phenomenology, psychology, and philosophy. He had been working intensively on the second, and longer, of these sūtras for the last six years, and only a few weeks before his death completed his final draft, which is now in the hands of Padmakara’s editors. We expect to be able to publish it within a year.

Despite his name, Gyurme Dorje was a Scot. He was born Keith McClellan, in Edinburgh, but changed his legal name after becoming a Buddhist practitioner. He studied Sanskrit at Edinburgh University and, after obtaining his Masters degree in 1971, left Scotland to travel in India and Nepal, where he stayed for most of the 1970s. He was an early Western student of Chatral Rinpoche, Dudjom Rinpoche, Kangyur Rinpoche, and Dilgo Khyentse Rinpoche.

I first met him in the winter of 1973-4 at Kangyur Rinpoche’s monastery in Darjeeling; Gyurme was in retreat doing his preliminary practices in the room below mine in an out-building of the monastery. In those days he lived on almost nothing by way of income. Later in the 1970s, I used to visit him where he lived, very simply, in a series of apartments in Boudhanath, near Kathmandu. In 1971, Dudjom Rinpoche had asked him to translate his massive History of the Nyingma School, and during all those years Gyurme had been busy on that major task and all the study and research it required, although it was not completed until much later. Extending the project still further, in 1980 Dudjom Rinpoche asked him to add a translation of his book, The Fundamentals of the Doctrine.

In the 1980s, Gyurme returned to the UK, to the School of Oriental and African Studies (SOAS) in London, and studied there for a PhD in Tibetan literature, which he received in 1987. His dissertation included an edition and annotated translation of the Guhyagarbha Tantra, along with an important and detailed commentary by Longchenpa, which remains an authoritative reference to the Nyingma tantras. During this time, with the collaboration of Matthew Kapstein, Gyurme completed the projects Dudjom Rinpoche had requested of him and brought the combined work to publication, along with a mass of research material, as a two-volume set The Nyingma School of Tibetan Buddhism: Its Fundamentals and History (Boston: Wisdom Publications, 1991). Gyurme also completed in these years his translation of The Tibetan Book of the Dead, although the book in its final edited form was only published in 2005 (London: Penguin Books).

In the 1990s, as a research fellow at SOAS, Gyurme worked for four years with Alak Zenkar Rinpoche on the huge task of translating the content of the Great Tibetan-Chinese Dictionary, and indeed adding to that content, to create what was supposed to be the three volume An Encyclopaedic Tibetan-English Dictionary. Sadly, only the first volume (2001) was ever released, and twenty years later the work still remains inaccessible.

During his years in London at SOAS and afterwards, he divided his time between the UK, Nepal, Tibet, and China, and was later based in Chengdu, from where he spent part of the year as a tour guide for groups travelling in Tibet. From 1985 onwards, he led over forty expeditions and cultural tours to the Utsang, Kham, Amdo, and Gyarong regions of Tibet, founding in 1989 his own tour company, TransHimalaya. He became a major authority on the sacred places of Tibet. His handbook for travellers in the Footprint series, Footprint Tibet, first published in 1996, went to four editions and must rank among the most astonishingly detailed and learned tour guides ever published. Gyurme also authored a Footprint Bhutan Handbook, first published in 2004 and now in its second edition.

Meanwhile, Gyurme continued to translate Tibetan texts and write books and articles on a huge range of topics to do with Tibetan culture, art, medicine, and of course Buddhist thought and practice.

During recent years, as well as his work on the Prajñāpāramitā sūtras for 84000 and Padmakara, Gyurme translated some particularly weighty and impressive works for the Tsadra Foundation. One of my own favorite reference works is his Indo-Tibetan Classical Learning and Buddhist Phenomenology, from Book Six of the series of Jamgön Kongtrul’s The Treasury of Knowledge (Snow Lion, 2012). More recently published are two equally massive volumes from the collection by Choying Tobden Dorje, The Complete Nyingma Tradition from Sūtra to Tantra (Snow Lion, 2016).

The following list of his published books gives some idea of the range of his scholarship, and it seems almost impossible that he could have achieved so much in a few decades:

The Sutra of the Transcendent Perfection of Wisdom in Ten Thousand Lines
The Complete Nyingma Tradition from Sutra to Tantra, Book 13
The Complete Nyingma Tradition from Sutra to Tantra: Books 15-17, The Essential Tantras of Mahayoga
“The Buddhas of Medicine,” in Bodies in Balance: The Art of Tibetan Medicine
Indo-Tibetan Classical Learning and Buddhist Phenomenology: The Treasury of Knowledge, Book Six, Parts One and Two
Jokhang – Tibet’s Most Sacred Buddhist Temple
The Tibetan Book of the Dead
A Buddhist Response to the Global Climate Emergency
Tibetan Elemental Divination Paintings
Bhutan Handbook
Tibet Handbook
Tibetan Medical Paintings
Dudjom Rinpoche’s The Nyingma School of Tibetan Buddhism: Its Fundamentals and History
The Guhyagarbhatantra and its XIVth Century Commentary Phyogs-bcu mun-sel

Two projects that he was working on in the months before his final illness are the volume on the Jonang tradition from Jamgön Kongtrul’s The Treasury of Precious Instructions (for the Tsadra Foundation), and a detailed commentary by Khangsar Tenpai Wangchuk on Longchenpa’s Treasury of Reality’s Expanse (for the Padmakara Translation Group). Both of these projects are being completed by colleagues.

That Gyurme was able to work so intensively on his books and translations is largely thanks to the extraordinary support and help he received from his wife, Xiaohong. She survives him along with their two daughters Pema and Tinley, as well as Gyurme’s son, Ogyen, by a previous marriage.

Gyurme was not only a prolific scholar, author, and translator. He was also an unusually kind, courteous, considerate person, a friend to many people, and an experienced Buddhist practitioner. Among the many tributes to him posted on Facebook, Charles Hastings wrote:

“He combined incredible erudition with extraordinary modesty and kindness. His enthusiasm for his work was astonishing. For him it was an immense joy to work on these marvelous texts. I had the privilege of spending a few of his last days with him and his family at the hospital. He was quite serene regarding himself, and only concerned for his loved ones, and for all the translations of precious works still to be done!”

I particularly appreciate, too, this post from Juice McReynolds:

“I remember coming across Gyurme Dorje at a hotel restaurant in Jyekundo in the summer of 2004. He was leading a group, and the few guests, plus several Tibetans, who were sitting at the table were all happy and relaxed. I joined them, and during our chat I mentioned the dichotomy of life up in the mountains but then having to come down into a city such as Yushu. He asked me if I had managed to merge my understanding during meditation with all the other times, and he said that is what Kyabje Dudjom Rinpoche had taught him to do.”

During his final days, Gyurme received visits and instructions from Kangyur Rinpoche’s sons, Jigme Khyentse Rinpoche and Pema Wangyal Rinpoche. He died peacefully in hospital, in the morning of February 5th, the anniversary of Kangyur Rinpoche’s own passing. He will be sadly missed, fondly remembered and appreciated—and his writings and translations will continue to inspire us all.