In the late afternoon of the 27th of October I had the curious and wonderful privilege of attending a reading of a sutra in the Mahabodhi temple in Bodhgaya, in the eastern part of India. The text, called The Play In Full, is newly translated by 84000 and one of the most important sutras in Mahayana Buddhism.

Rather than simply a reading of the sutra, this was a resounding. Traditionally a resounding is a monastic ritual in which monks and nuns distribute the entire Kangyur (the words of the Buddha) and, each taking responsibility for different texts, read them aloud, simultaneously. The Play in Full tells of the life of the Buddha from the point of view of his Awakening. So the setting – in the shade of the Bodhi tree, the very place where the historical figure Gautama Buddha achieved enlightenment – was peculiarly appropriate and made for a moment that was nothing less than extraordinary.

Leading the resounding was Dzongsar Khyentse Rinpoche, founder of 84000, with Sri Nangzey Dorjee , H.E Dungse Avikrita Vajra Rinpoche and H.E. Dungse Abhaya Vajra Rinpoche, along with more than 700 monks and 300 of Rinpoche’s students from different parts of the globe. 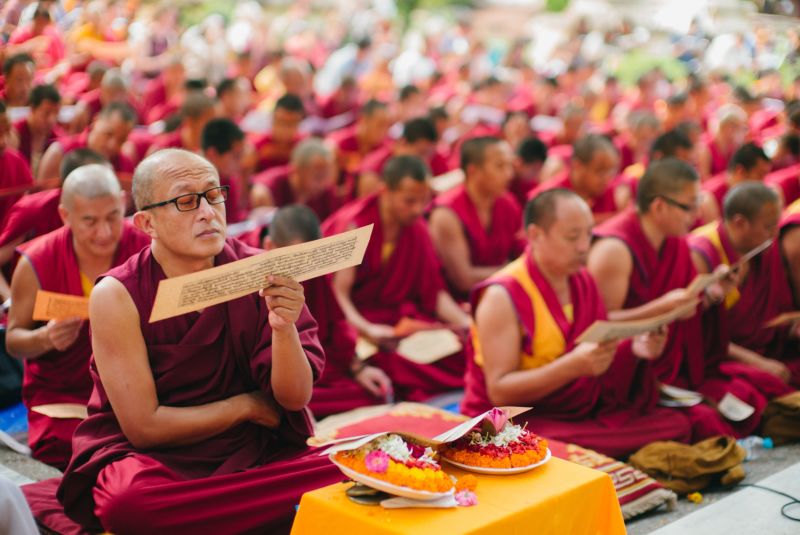 Resounding of “The Play in Full” under the Bodhi Tree. Photo: Pawo Choyning Dorji

After the wave of thick heat that washes over an Indian afternoon subsided, the 27 chapters of the sutra were distributed in English, Chinese and Tibetan. As the assembled monks and students looked at the chapters they had been given, I sensed an excitement like those few moments before a classical orchestra begins a symphony. But here, under the Bodhi tree in India, all the different instruments – the strings, the brass, the woodwinds – would play different parts of the music simultaneously and in three languages.

After a speech from the executive director of 84000, Huang Jing Rui, reminding us of the extent to which we rely on translators for access to the Dharma, Dzongsar Khyentse Rinpoche said some inspiring words. He pointed out that we are more than two thousand years too late to encounter the Body of the Buddha, and we are eons of purification away from encountering the Mind of the Buddha, but we can meet the Speech of the Buddha right now through sutras like this. By reading, contemplating, or even just possessing such a text as The Play in Full, many favorable circumstances, causes and conditions are created.

As the gentle golden light of the late afternoon threw long, welcome shadows over the assembly, Rinpoche began the Resounding. More than a thousand voices joined to create a unique and joyful hubbub of sound. People responded to the playful richness of the text in a variety of ways: some were chanting; some declaiming like a speech; some were incanting quietly. A smiling young monk in a patch of sunlight enunciated each word carefully, as if telling a bedtime story to a beloved child. All human voice and cadence was there giving life to beautiful words spoken some 2,500 years ago. At times it was a glorious symphony of dissonant human voices, at others something like a wedding party or celebration where everyone seemed to be engaged in the most profound conversations. And then, thanks to where we were and what was being said, there was the sense that something important was going on. 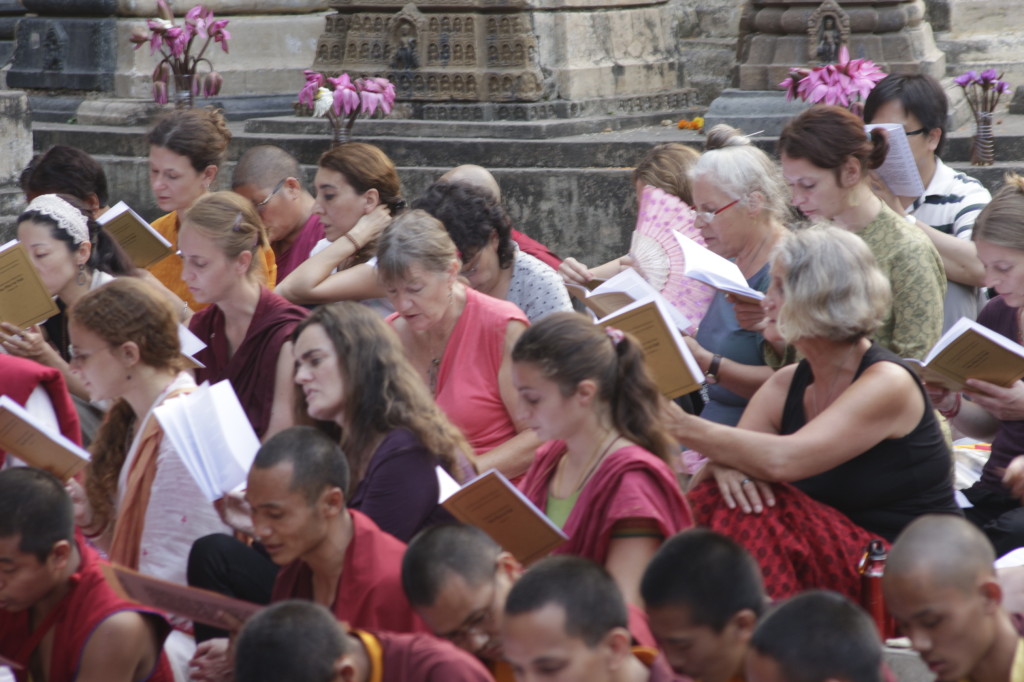 The sutra resounding was done in three languages—English, Chinese and Tibetan.

It was magical under the Bodhi tree that afternoon, the stray dogs wandered amidst us looking puzzled and when the light began to fade, thousands of birds that roost in the temple trees began their own roaring songs, as if challenged, or perhaps inspired, by the strange human utterances.

This resounding would not have happened without 84000 translating this sutra in to English and I might never have witnessed such a unique human gathering. 84000 has not only preserved these texts through translation but has cracked open the door to this wonder for beginners like me. The 84000 resounding under the Bodhi Tree was a magical and healing experience, reflected in the words I read aloud from chapter 7:

Since gentle fragrant breezes
Perfumed with divine incense
Pacify the illnesses of beings,
He will become the king of physicians.