John Canti, 84000 Editorial Chair and Director, shares his experience of the unique challenges and opportunities that arise from working with a sūtra translation that has already been in circulation for many years. In reference to Robert Thurman’s existing translation of The Teaching of Vimalakīrti, Canti says, “The task was to try to bring Thurman’s translation into the same format and overall approach that we’ve been able to develop for new translations so that it didn’t seem out of place, while at the same time to avoid too much modification that might have spoiled the qualities of the originally published work.” 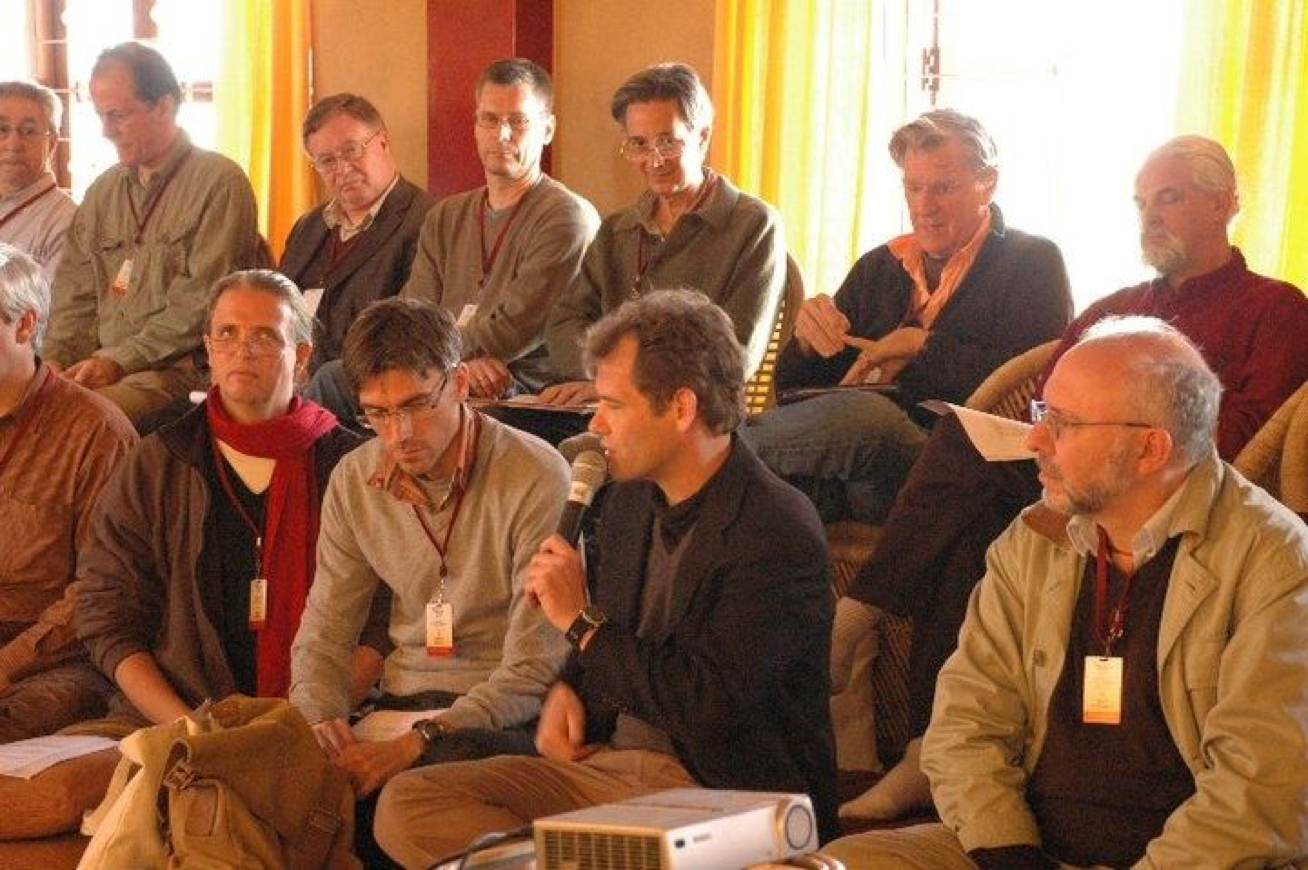 Canti (back row, center) and Thurman (to Canti’s left) sitting next to each other at the 2009 Translating the Words of the Buddha conference.

The 84000 edition of Thurman’s translation of the Vimalakīrti Sūtra is the first significantly revised edition since its original publication in 1976. “An additional need [for the new edition] was to take account of the Sanskrit version that has come to light relatively recently, and long after Thurman’s translation was made.”

Canti believes there is more to the sūtra than “how the layman Vimalakīrti upstages all of the Buddha’s disciples,” and personally finds inspiration in the depiction of the different ways of communicating the Dharma in different buddhafields. “I guess we have to accept that the path most adapted to our own needs involves quite a lot of arduous work on ourselves, because we are so blinkered and narrow-minded. But it is liberating to be so graphically reminded that the ultimate meaning of the Dharma is way beyond any ideas we might have of what it’s about and what we hope to achieve with it.”

So much of what you do with 84000 is to translate sūtras that haven’t yet been translated into English. What was it like working on a sūtra that’s already been translated?

Adopting and adapting an already published translation is, of course, very different from working on a first-time translation. That the content was already familiar didn’t make that much difference, but the task was to try to bring Thurman’s translation into the same format and overall approach that we’ve been able to develop for new translations so that it didn’t seem out of place, while at the same time to avoid too much modification that might have spoiled the qualities of the originally published work. An additional need was to take account of the Sanskrit version that has come to light relatively recently, and long after Thurman’s translation was made.

You were able to read Dzongsar Khyentse Rinpoche’s commentary on the sūtra this time. How did it affect your understanding of this sūtra, and did that influence the editing in any way?

In fact we didn’t see Rinpoche’s commentary until the editing of the translation was almost complete. Hardly anything needed to be changed as a result. Rinpoche’s commentary fills in very nicely some of the cultural context and makes it easier for people nowadays to relate to the style of the original sūtra, but I think the actual text of the sūtra is best left to speak for itself; in any case our approach was not to change the nature of Thurman’s translation.

What went into the decision to do an 84000 translation of the Vimalakīrti Sūtra? Why is this sūtra so important?

It’s a text that’s interesting and relatively easy to read, is built round an intriguing narrative, and has many very profound messages. Although there are, of course, many important sūtras—and many much less known ones whose importance we have yet to discover—this was an obvious one to tackle in the early years. The existence of a good translation helped, and we had no hesitation in welcoming Thurman’s offer early on in the project’s first years.

It has taken a while to get to the publishing stage for several reasons, one of which was that it took time to be sure we were not contravening the rights of the original 1976 book publication. There are a number of pirated versions circulating on the internet, but this carefully revised edition, as well as being legal, will also, we hope, offer readers a better presentation and more contextual information.

The Vimalakīrti Sūtra has a prominent place in sūtra study across Buddhist schools, why do you think that is?

It’s true that this sūtra seems to have been a favorite over the centuries in China. In Tibet, though, it was hardly studied at all, and unlike many of the important Mahāyāna sūtras it is very rarely quoted in the treatises and commentarial literature. I think there are many reasons for this difference, one of them being simply that the Kangyur sūtras as a whole, with a few notable exceptions, were rarely studied formally in their own right anyway in Tibet. Possibly, too, the figure of the layman-scholar-adept was more familiar to Chinese readers than to Tibetans. However, Vimalakīrti and the teachings in this text were not entirely unknown; I was personally particularly intrigued that in the preliminary practices of a terma cycle revealed by one of my own teachers, Kangyur Rinpoche, Vimalakīrti is the leading bodhisattva representing the Mahāyāna saṅgha in the Refuge Tree.

What people tend to remember most about this sūtra is how the layman Vimalakīrti upstages all of the Buddha’s disciples, whether śrāvakas or bodhisattvas, by pointing out how, even in the field of Dharma practice in which they are considered the most expert, they have missed the most profound meaning. With the śrāvaka disciples he is mercilessly critical, with the bodhisattvas more respectful, but with both groups we are left in no doubt that his understanding goes beyond theirs. Only Mañjuśrī can have a real dialogue of equals with him. At that level, being a monk or a layman, conforming to the usual rules and practices or not, is not the point.

But, as Rinpoche has commented, there is much more in the sūtra. One of my own favorite topics is the mention of ways of communicating the Dharma in other buddhafields that are completely different from those used by Buddha Śākyamuni in our own. Whereas here the only approach that really works is to explain the path beginning with renouncing saṃsāra and understanding how we create our own suffering, there are buddhas who teach simply by means of odors (Gandhottamakūṭa at 9.22, or page 207 in the book); and others (10.12 or pages 212-213) who teach using light, beauty, robes, food, water, magical incarnations, space, silence, and a whole panoply of other means.

I guess we have to accept that the path most adapted to our own needs involves quite a lot of arduous work on ourselves, because we are so blinkered and narrow-minded. But it is liberating to be so graphically reminded that the ultimate meaning of the Dharma is way beyond any ideas we might have of what it’s about and what we hope to achieve with it. 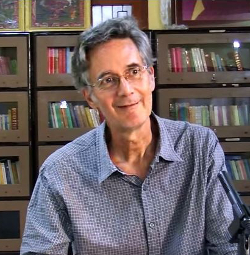 John Canti is a Buddhist practitioner, translator, and physician. While studying medicine at Cambridge University in England, he first had contact with Buddhist teachers and started to practice under their guidance. In 1972, he met Dudjom Rinpoche, who became one of his three principal teachers. The others were Kangyur Rinpoche and Dilgo Khyentse Rinpoche, both of whom he met soon afterwards. Qualifying meanwhile as a doctor, he held hospital appointments in London and Cambridge, starting surgical training. But in the late seventies, somewhat disillusioned with medicine in an academic setting, he moved to eastern Nepal to establish tuberculosis programs in two remote hill districts virtually without health services.

A few years later, in 1980, he was presented with a unique opportunity, which he seized: to undertake a long retreat in the Dordogne, France, practicing under the guidance of Dudjom Rinpoche, Dilgo Khyentse Rinpoche, Pema Wangyal Rinpoche, and Nyoshul Khenpo. After two consecutive three-year retreats, he and some of his fellow retreatants, inspired by their teachers and with the aim of making some of the major works of Tibetan Buddhism available to Western readers, formed the Padmakara Translation Group, of which he is now president. He also had the honor of serving Dudjom Rinpoche as physician during his final years, and subsequently coordinated the medical care of other lamas and practitioners in India, Nepal, and Europe, as well as that of three-year retreatants in the Dordogne.

Still based in the Dordogne, he has continued his translation work with Padmakara, and for many years was also a Fellow of the Tsadra Foundation. In 2009 he was appointed Editorial Chair of the newly created 84000 project, and (although he has a translation of the Uttaratantra-shastra with Mipham Rinpoche’s commentary still to complete) his work for 84000 is now his principal occupation.