84000 recently had the opportunity to sit down with Yongey Mingyur Rinpoche to discuss the importance of translation in Singapore. Mingyur Rinpoche, an author of four books, is a leading teacher in Tibetan Buddhism and has recently returned from a four-year retreat.

More videos available on our Youtube and Vimeo channels.

Mingyur Rinpoche also kindly answered the following questions, and offered his advice to the 84000 team. View the full interview below:

How do you feel about 84000’s work and the publishing of the Kangyur and Tengyur online?”

In Tibetan, we have three yanas: Hinayana, Mahayana, Vajrayana. So the first [most] important [focus] is the source of [the] translations. You are going to translate from Tibetan into English. I think that is very important because it is full [complete]. All of the words of Buddha exist in the Tibetan language. Now we cannot find even in Sanskrit, also, right?

The second thing is: [it has] never [been] translated, the complete teachings of the Buddha. [This has] never happened before. So this is a very, very important project.

For me, I am really happy to see this progress. And, of course, it is a lot of effort from the committee and the volunteers and staff and, in particular, Dzongsar Khyentse Rinpoche, who has great vision for the future. Rinpoche always has unique and great wisdom to see the future, and this is very meaningful. So I really rejoice and thank you for all of you.

Do you have any advice, general or specific, for 84000 as we continue to work on translating the Kangyur and Tengyur?”

I think, until now, you all are doing very well, and [are] divided [in]to many, many translators, but at the same time, [you] try to work together, right? That’s very good. Maybe you might have kind of like each translator, and then [you] might have common platform where they can connect [with] each other, contact each other, and constantly they can exchange ideas. I think, somehow, [working] individual[ly] but [also] work[ing] together – I think is very important.

Then, of course, when you translate, the detailed part [is] always more difficult. So at the beginning, it is… like what we call: “if you want to wash the clothes, the gross level of dirty [is] easy to wash, but the fine [level of] dirty is very difficult to clean!” So always if there’s some more detail, you might see more work. But anyway, this is [a] very good beginning now, so this is really, really meaningful for the world and for everybody..

How can we best encourage more people, not just Westerners but non-Tibetans, to read and study the Kangyur?”

The Kangyur has so many different types of teachings; it is like [the] ocean. There’s Hinayana, Mahayana and Vajrayana, and there’s a lot of stories, there’s a lot of… kind of like, memento of the Buddha’s teachings. And you can also know some… a little bit of history from there, and, of course, you can learn some meditation – [it’s] the original source of Buddhist meditation. And you can use… you can study the Kangyur as [a] research subject, and support for your practice, your meditation, and support for your philosophy, whatever you are studying, sort of background [support]. So normally what we call…. although what we call in Tibetan, “the commentaries,” [there are] a lot of different commentaries, and there’s a lot of pith instructions, and there’s a lot of teachings, which is, uh, kind of like… tries to summarize the meaning of Kangyur. But then we always refer back to the Kangyur, [and] after you understand a little bit of the basic teachings of the buddhadharma. So if you study directly the Kangyur, there is lot, a lot, of benefits. So, of course, for the Buddhists: [it’s] good for the view, good for the meditation, good for the study, good for the, like, philosophy background. And non-Buddhists also benefit somehow: you can learn meditation there’s a lot of things about loving-kindness, compassion; there’s history, there’s so many things you can study.

Mindfulness meditation has become very popular nowadays, yet people are also saying it is losing its Buddhist roots. Which sutras do you think 84000 should translate and make available, to help people understand the roots of all these practices?”

How do you think we can make 84000 better known among the Tibetan and Himalayan community?”

I think the young generation in Tibet, and also the Himalayas region, I think they might benefit in the future. They are Tibetan descendants; they have [a] background of buddhadharma, but sometimes they don’t know how to read, how to write in Tibetan, also. So it might be of benefit for them.

May we request Rinpoche one day to teach at least one of the sutras we have translated.” 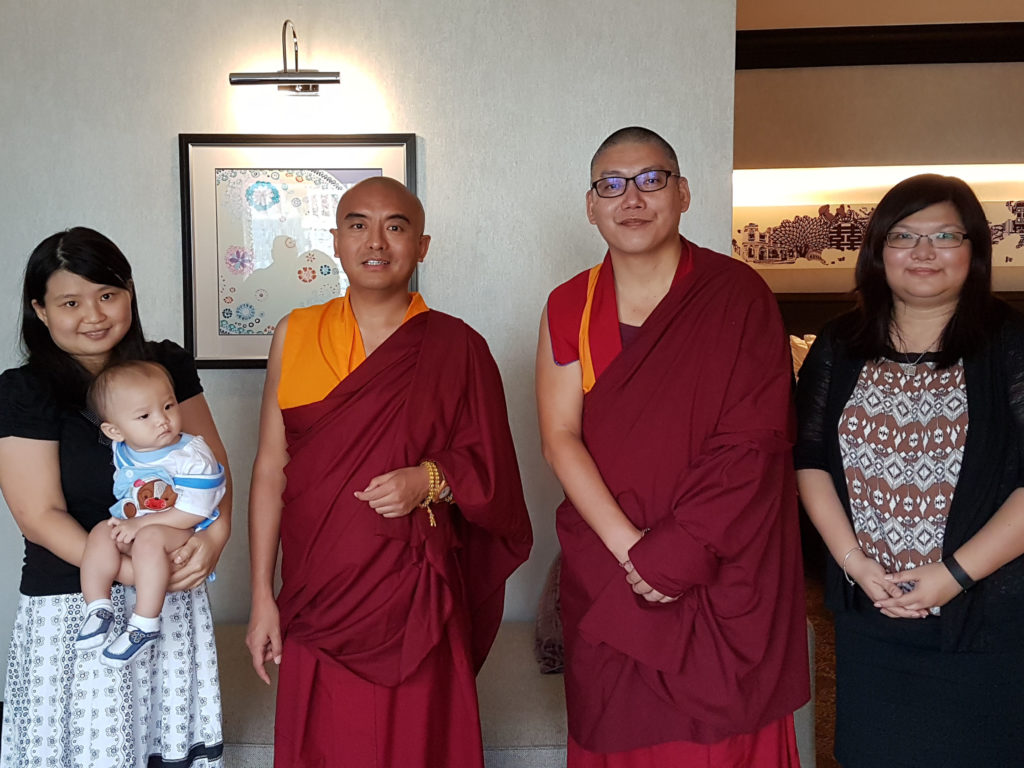 Mingyur Rinpoche met with the 84000 team and offered his advice on the translation initiative.

Yongey Mingyur Rinpoche possesses a rare ability to present the ancient wisdom of Tibet in a fresh, engaging manner. Born in 1975 in the Himalayan border regions between Tibet and Nepal, Yongey Mingyur Rinpoche was drawn to a life of contemplation from a young age. He spent many years of his childhood in strict retreat. At the age of 17, he was invited to be a teacher at his monastery’s three-year retreat center, a position rarely held by such a young lama. He also completed the traditional Buddhist training in philosophy and psychology, before founding a monastic college at his home monastery in north India.

In addition to extensive training in the meditative and philosophical traditions of Tibetan Buddhism, Mingyur Rinpoche has had a lifelong interest in Western science and psychology. Mingyur Rinpoche teaches throughout the world, with centers on five continents. His best-selling book, The Joy of Living: Unlocking the Secret and Science of Happiness, debuted on the New York Times bestseller list and has been translated into over 20 languages. Rinpoche’s most recent books are Turning Confusion into Clarity: A Guide to the Foundation Practices of Tibetan Buddhism, Joyful Wisdom: Embracing Change and Finding Freedom, and an illustrated children’s book entitled Ziji: The Puppy that Learned to Meditate.

In November of 2015 Mingyur Rinpoche returned after four years of solitary retreat. He is currently teaching his monastic and western students living around the world. See Rinpoche’s full biography here.