The Stem Array | A sūtra that “overwhelms the mind”

The Stem Array, which tells the beautiful story of the young layman Sudhana’s quest for awakening through encounters with a variety of spiritual teachers, forms the forty-fifth and final chapter of the Buddhāvataṃsaka (A Multitude of Buddhas) Sūtra. We recently sat down for an interview with Peter Alan Roberts, the translator of this text, to hear more about his experience of translating what he calls a sūtra that “overwhelms the mind.”

This sūtra will be published on the auspicious day of Lhabab Düchen, October 27, 2021, along with our new mobile app for iOS and Android.

84000: The Stem Array is the lengthy final chapter of the Avataṃsaka Sūtra, as well as an important and popular text in its own right. Before we focus on its contents and your experience with it, can you please situate this chapter within the larger framework of the Avatamsaka Sūtra for us?

Peter: The title The Stem Array is a translation of the Tibetan interpretation of the Sanskrit title Gaṇḍavyūha, though I think its original meaning is probably something more like, “an array of episodes.”

The Buddhāvataṃsaka Sūtra or Avataṃsaka Sūtra is a compilation of Mahāyāna sūtras that formed in India. Another major compilation of sūtras in the Kangyur is the Ratṇakūta. However, while the latter is a heterogeneous collection of diverse sūtras, the Avataṃsaka sūtras are united by a common theme: throughout them, the Buddha is silent, and the teachings are given by others. The Stem Array is the last sūtra in the collection, and all the 44 sūtras of the Avataṃsaka that precede it take place while the Buddha is in silent meditation under the bodhi tree during the two weeks after his enlightenment.

Although the Avataṃsaka collection increased over time, The Stem Array is the concluding sūtra in all versions of the compilation. It is a long account of the encounters of a young layman called Sudhana with a succession of spiritual teachers. The Stem Array stands out from the other sūtras in the collection not only by its length—alone it takes up about one-third of the Avataṃsaka—but also by its unique and striking setting. It takes place not under the bodhi tree but later, while the Buddha is in silent meditation in Śrāvastī, surrounded by his disciples and bodhisattvas. Later in the sūtra we nevertheless come across Sudhana visiting the night goddesses who are encircling the Buddha in his meditation under the bodhi tree, and it is just this sort of counter-logical approach that is characteristic of The Stem Array. Another example of this is that when the bodhisattva Mañjuśrī departs from the assembly, the sūtra follows him, never returning to the original setting in Śrāvastī. Instead, Mañjuśrī goes to south India where he meets Sudhana. From that point on, the sūtra follows Sudhana’s journey from teacher to teacher, including his return to Mañjuśrī at one point, and then ends—one could say—rather abruptly with the Bhadracarya prayer (‘The Prayer for Good Conduct”) that the bodhisattva Samantabhadra recites to Sudhana, and without any traditional conclusion.

The teachers that Sudhana meets are far from typical: a little boy playing in the sand, a young girl, a courtesan, non-Buddhists, the Buddha’s mother, his wife, merchants, and goddesses of the night. And instead of a specific teaching on a particular subject, each teacher describes their own attainments, which are always incredibly vast or so extraordinary as to be beyond conception. Even more atypical, a number of them seem to have never met the Buddha Śākyamuni, but have received teachings from other buddhas, even countless buddhas seen in all atoms. Therefore, this sūtra best matches the title of the collection, Buddhāvatamsaka or A Multitude of Buddhas.

84000: This sūtra is quite unique in that most of its narrative takes place in South India where it follows the journey of the young layman, Sudhana, beginning with his meeting Mañjuśrī, who then instructs him to go to a certain kalyāṇamitra, a “good friend,” in other words a spiritual teacher. Successively, Sudhana receives a multitude of teachings from children, non-Buddhists, a courtesan, merchants, and so on, among them a number of women. So, who then is Sudhana?

Peter: Sudhana is unique among the personages that appear in the Canon. He does not appear in any other sūtra, he does not receive a teaching from Śākyamuni Buddha, and it is specified that he searches for one particular teacher for twelve years. There is no description of him in the sūtra apart from his being called a śreṣṭhidārakai, which could mean the son of a head merchant, someone who is the head of a guild, implying wealth. In fact, he is the eldest of the eleven sons of the merchant Mahāprajña, and the great wealth of his family is said to have miraculously appeared at his birth. In the carved panels of the Borobudur temple in Indonesia he is even portrayed in a princely manner, accompanied by an entourage.

84000: Which of these many characters did you personally find most interesting?

Peter: The ones that spring to mind are the little boy playing in the sand who recites pages of untranslatable numbers; the young girl who can magically produce anything from her small metal bowl; the monk who focused on the ocean for twelve years until a buddha appeared from it and gave him more teachings than it would take a whole eon to write down; the night goddess who sees as many buddhas as there are atoms in each atom and can hear and remember everything they are simultaneously teaching; the courtesan and, the non-Buddhist ascetic practicing sitting between four fires under the hot sun. And after they each describe their astonishing attainments they say, “But that’s all I’ve accomplished, so now go see…”!

84000: With your inevitably close reading of this sūtra as you translated it into English, what was the one take home teaching or message for you, and how do you think contemporary readers can relate to it?

Peter: I would say it primarily creates awe by overwhelming the reader with details and attributes that the mind cannot grasp. 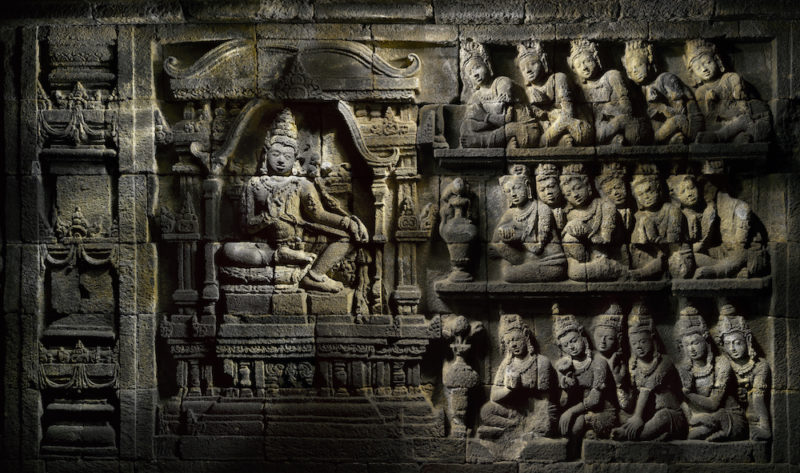 84000: Scenes from The Stem Array make up a large portion of the sculptural reliefs at Borobudur, the great 9th-century Buddhist monument in Indonesia. This is just one example of how influential this sūtra was — can you share some insights into how and why this particular sūtra traveled so far and wide?

Peter: This text is unique among other sūtras as Buddha Śākyamuni barely appears, and the story relates the journey of a young man who, like Alice in Wonderland, meets with all kinds of astonishing, marvelous people. Naturally, for many, this makes the text more interesting to listen to than to a didactic teaching with little action or movement.

Toward the end of the sūtra there is the surreal entry into a building that embodies enlightenment, the kūṭāgāra, or storied pavilion, of Maitreya. It is this description that appears to have inspired the building of Borobudur: not only are many of the carved panels illustrations of the sūtra, but the upper level has a panel depicting each description of a specific detail of the interior of Maitreya’s building.

84000: This sūtra also received a lot of attention in China, having been translated into Chinese between 388 and 408 CE. There are some differences between the Chinese translation and the later Tibetan one (early ninth century). What are the main differences, and is there a consensus on how these differences came to be, or is this still something to be explored?

Peter: One obvious difference between the Tibetan and Chinese versions of this particular sūtra is the title: In the Chinese, Buddhāvataṃsaka is translated as ‘Buddha garland.’

Generally speaking, comparing the Tibetan translations of sūtras with earlier Chinese translations, and also with the earliest known Sanskrit manuscripts such as those found in the buried Gilgit library, has shown us how sūtras often evolved through addition. That resulted in differences between the Tibetan translations and Chinese translations, which tend to preserve an earlier state of the text. We can certainly see this process at work in this sūtra, as well as with other sūtras in the Canon. In this instance we can also see evidence of further developments that occurred in the Sanskrit of the text, even after the ninth century translation into Tibetan had been made, because the earliest Sanskrit manuscript of this sūtra dates from the twelfth century.

Peter: In Tibet, sūtras have been and still are given far less importance than they are in China. Unlike in China, where the Avataṃsaka Sūtra became the basis for the Huayan school and commentaries would evaluate different levels of meaning in the sūtra, no commentary on the Gaṇḍavyūha was composed in Tibet, and it was not a rich source of quotations for other Tibetan commentaries. However, the sūtra concludes with the Bhadracarya prayer, which continues to exist independently, too, and was in India one of the later additions to the sūtra. Known in Tibetan as the Zangchö Mönlam (The Prayer for Good Conduct), this is very commonly practiced, and is one of the few extracts from the Kangyur that play a significant role in Tibetan Buddhism—on a par with The Essence of the Perfection of Wisdom (The “Heart Sūtra”) and Praise to Tārā with Twenty-One Verses of Homage.

84000: How would you describe the experience of translating such a magnificent and surely challenging text?

Peter: The comparative edition (Pedurma) of the Degé Kangyur includes footnotes that show the variations and differences in spellings between the Degé and other Kangyurs, which is helpful because the spelling can significantly change the meanings of words. But unlike Tibetan and English translations which tend to homogenize the language of the sūtras, in extant Sanskrit works one often finds a very different voice. There is an extant Sanskrit version of this sūtra which has been a really valuable reference, making it possible to check which variant spellings in the Tibetan best match the meaning in the Sanskrit. However, the Sanskrit text presently available must inevitably also have errors of its own, and so wherever the Tibetan and Sanskrit disagree, we were able to check with our Chinese texts consultant, who can indicate which meaning is matched in the Chinese version.

One particularly challenging characteristic of this sūtra is the use of successive long compounds, where numerous words are conjoined into one long word to describe some inconceivable quality. Compounds are a feature of Sanskrit in general, but their use and length are especially prominent here. In Sanskrit, words lose their cases when compounded and so the relationship between the words becomes more open to interpretation, and the effect of these successive flows of words can often overwhelm the mind.

Because Tibetan and English do not have such compounds, the relationship of the words has to be specified. So in this case the translation follows the decisions made by the Tibetan translators. If there is an egregious error in the Tibetan—perhaps because of a faulty Sanskrit manuscript—then there may be a noted emendation.

One example was the little boy’s recitation of numbers. Commonly with such lists in the sūtras there are variations between the Chinese, the Sanskrit, and the Tibetan. At first, I attempted to give an English equivalent to these vast numbers. But once the standard names of large numbers had been surpassed, I had to use the Sanskrit, with notes, because the exponential increase in their values in the sūtra left far behind even the rarely used English names I had found when I researched them, such as ‘nonagintillion’ and ‘googol’!

The Stem Array will be published first on our 84000 mobile app, launching on the auspicious day of Lhabab Düchen, October 27, 2021. Make sure you are signed up here to be the first to receive the download links!