Teaching on “The Question of Maitreya”

On the rooftop of the Via Elementary School on two sultry autumnal days in November, sponsored by Deer Park Institute (Siddhartha’s Intent India) and Siddhartha’s Intent Singapore, Dzongsar Khyentse Rinpoche gave teachings on one of 84000’s newly translated sutras, The Question of Maitreya.

Framed by a backdrop of haze-softened rice paddies and rolling hills, Rinpoche addressed an audience of approximately 500 attendees of various nationalities and spiritual backgrounds. Accentuating the serenity of the unconventional yet entirely apposite setting, the music of Shri Tilak Biswas (flautist) and Shri Dharmendra (vocals) greeted attendees and set the tone for the teaching. It was under these conditions that the expounding of The Question of Maitreya took place. 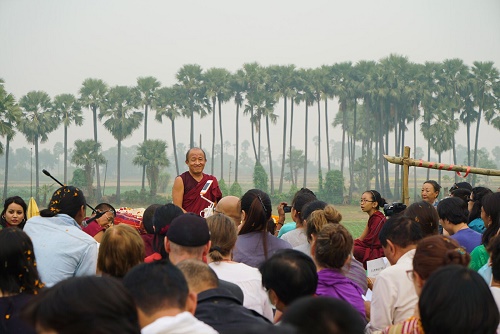 The teaching took place on the rooftop of a local school, in the midst of rice paddies and open fields. Photo: Winnie Alamsjah

Befittingly, Khyentse Rinpoche began his teaching by drawing attention to the significance of the location, and asked listeners to reflect on the notion that “it was somewhere here… we may be sitting on the very spot where Buddha had walked.” Though that was over 2500 years ago, Rinpoche expressed his opinion that “the teaching of the Buddha is so relevant, probably more now than ever, because of its emphasis in finding the truth, discovering the truth. The truth not just of matter, but of our mind, perception, and the world.”

Before diving into his reflection on The Question of Maitreya, Khyentse Rinpoche began by saying to his listeners that this text, like many sutras, was very profound and also sometimes tedious, and warned that “someone like myself has no way to even think of explaining [the sutra.]” To accurately explain a sutra, he explained, one “needs to be a sublime being, someone who has already reached the first bhumi.”

Nonetheless, after offering his interpretation of the sutra over the course of the two afternoon teachings, he hoped that attendees had learned that the sutras of “the Kangyur have an incredible amount of wisdom, that [they are] not just full of repeated rituals, and…you know… sort of cultural… hang ups, and [that they can serve as a] sort of survival kit… That [they] actually have really profound, complete paths to liberate sentient beings, and to liberate oneself.” 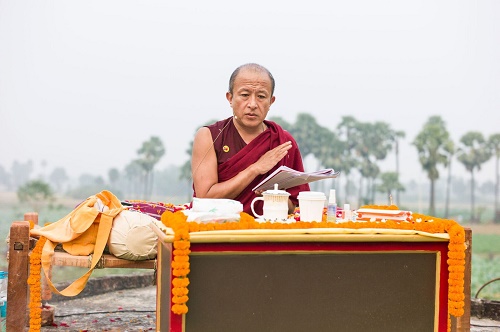 In The Question of Maitreya, the Bodhisattva Maitreya asks the Buddha what qualities a bodhisattva needs to attain enlightenment quickly. The Buddha outlines several sets of qualities, foremost among them the altruistic intention of perfect bodhicitta. The Buddha then recounts to Ānanda how, in a former life, Maitreya revered a previous Buddha and, wishing to become just like him, at once realized that all phenomena are unproduced. Ānanda asks why Maitreya did not become a buddha sooner, and in answer the Buddha compares Maitreya’s bodhisattva career with his own, listing further sets of qualities that differentiate them and recounting examples of the hardships he himself faced in previous lives. Maitreya, on the other hand, has followed the easy bodhisattva vehicle using its skillful means, such as the seven branch practice and the training in the six perfections; the aspirations he thus made are set out in the famous “Prayer of Maitreya” for which this sūtra is perhaps best known. The Buddha declares that Maitreya will become enlightened when sentient beings have fewer negative emotions, in contrast to the ignorant and turbulent beings he himself vowed to help.

For those interested in hearing more about Dzongsar Khyentse Rinpoche and his teachings, please refer to the Siddhartha’s Intent International website.