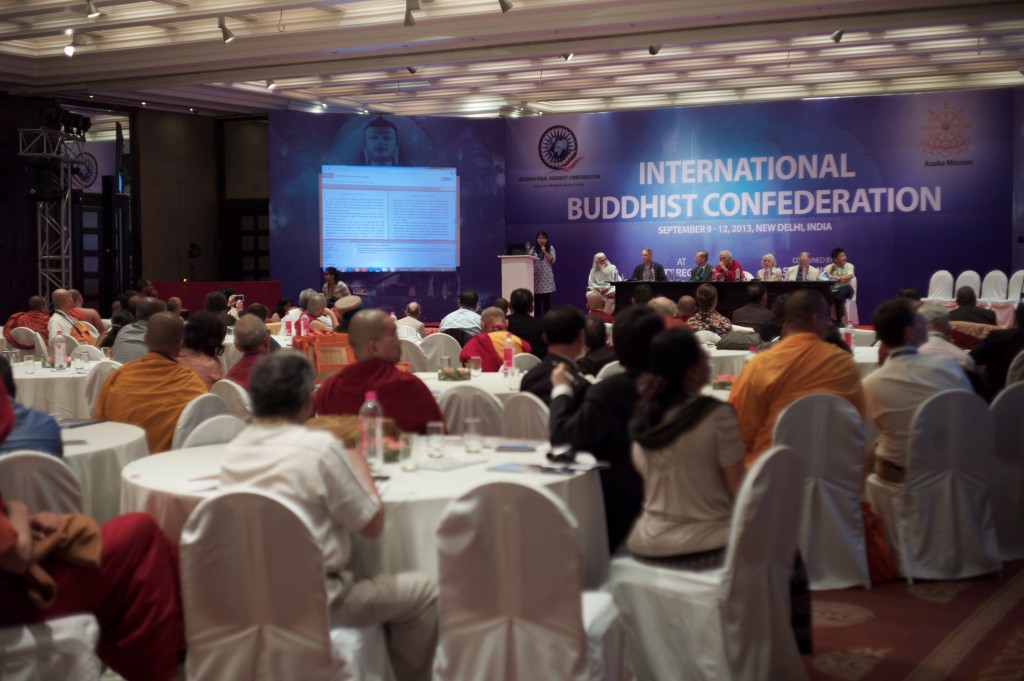 84000 is honored to have participated in the first Founding Member’s Conclave of the International Buddhist Confederation (IBC), convened by Asoka Mission, held in New Delhi, September 9-12, 2013. Under the banner of “Collective Wisdom, United Voice,” the IBC aims to create a global role for Buddhism to preserve the Buddhist heritage and promote Buddhist values for the benefit of all.

About 250 Buddhist leaders from 39 countries participated in this IBC 2013 meeting. During the meeting, important topics to the Buddhist community and mankind were discussed by panel speakers and in work groups, including:

Huang Jing Rui, Executive Director of 84000, gave a presentation titled “Collective Wisdom in the Public Domain.” Jing Rui used 84000’s experience to share the benefits of making digital Buddhist texts available in the public domain. She also discussed the limitations of technology and the need to overcome current communication barriers to prevent duplication. She recommended that the IBC consult with key stakeholders to understand where the existing resources are, compile a list of current and completed projects, and take careful notes on the technical setup, organizational needs and usages. In the longer run, standards of best practices and technological solutions should be developed that would make it easier for digital Buddhist texts to be shared.

In addition, while Dzongsar Jamyang Khyentse Rinpoche, Chairperson of 84000, was unable to attend, Mr. Suresh Jindal read his paper “The Future of Buddhism in India.” In his paper, Khyentse Rinpoche elaborated on the loss of roots and identity in this age of globalization, and the responsibility that traditionally Buddhist countries have in protecting their Buddhist roots, including the translation of Buddhist canonical texts into modern languages.

84000 is grateful to have had the opportunity to participate in this meeting to learn about the issues that Buddhist communities worldwide are facing and addressing. It is also a cherished opportunity for us to catch up with teachers, scholars, translators and friends. We look forward to continuing these conversations and working with friends and partners around the world to preserve and transmit the Buddha’s heritage