History has largely forgotten how important this jewel of a country and cradle of the dharma once was. 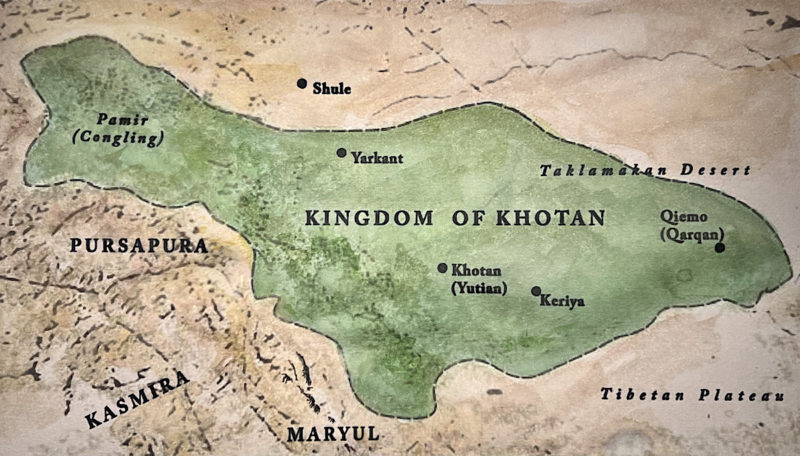 The Sources of Buddhist Traditions is a monthly column in Tricycle magazine from three of the major digital resources for Buddhist research, texts, and translation: Buddhist Digital Resource Center, The Treasury of Lives, and 84000: Translating the Words of the Buddha. Focusing on stories, texts, translation, and teachers, the series will illuminate aspects of Buddhist practice, thought, and tradition.

One of the most fundamental teachings of Buddhism is that everything changes—and that even applies to the teachings themselves. In places where the dharma once flourished, it can disappear, and in places far from its origins it can take root. Time and place, history and geography, are always on the move. Such is the case with the ancient Buddhist kingdom of Khotan, a land said to have been formed by the draining of a mountain-rimmed lake.

Now a prefecture (Hotan) in China’s troubled Xinjiang region, Khotan was one of the wealthy Central Asian oasis states along the Silk Roads, the overland trading routes that connected India, China, and the rest of Eurasia. It lies on the southwest edge of the vast desert that fills the Tarim Basin. To its south towers the Kunlun mountain range, which divides Khotan from present-day Ladakh to the southwest and Western Tibet to the southeast.

For several centuries BCE and during the first millennium CE, Khotan was a small but important kingdom, subject to waves of migration, invasion, and domination by much more powerful states to its west and east, but surviving thanks to its own resources (silk production and jade) and above all to its position as an oasis on such a major trade route. This small and not very powerful country became an outpost of Indian culture during or soon after the reign of Ashoka. It had flourishing, perhaps pre-Mahayana, Buddhist institutions by the first century BCE; was connected to the ancient kingdom of Gandhara and Kashmir in India’s northwest; and sustained Mahayana communities as early as the third century CE. The kingdom also played an outsized role in the spread of Buddhism from India to China. In the third and fifth centuries respectively, the two Buddhist texts that arguably have had the greatest influence on Chinese Buddhism, The Perfection of Wisdom in Twenty-five Thousand Lines, and the Buddhavatamsaka (or “Flower Ornament”) Sutra, were first translated into Chinese from texts found in Khotan.

The kingdom’s founding myths center around the draining of a lake on the orders of the Buddha Shakyamuni and describe a land planned, visited, and blessed by the buddhas of the past. The myths are—uniquely—enshrined as canonical scriptures in Tibetan in the form of two sutras preserved in the Kangyur, the words of the Buddha translated into Tibetan, and two prophetic histories in the Tengyur, Tibetan translations of Indian commentaries on the scriptures. They are among some twenty texts listed by the thirteenth century Tibetan scholar Chomden Rikpai Raltri as having been translated into Tibetan from Khotanese.

A translation of one of the two sutras was published by 84000 last year. It is The Prophecy on Mount Goshringa (Toh 357, Gosrngavyakarana), and describes the Buddha flying to Khotan with a large entourage, and blessing the creatures that live in the great lake that has hitherto filled the landscape. He consecrates the country’s other features, its sacred mountain, stupas and sites; gives teachings there; and makes prophecies about its future importance as a land for the practice and preservation of the dharma. At the end of the sutra, the Buddha asks disciple Shariputra and divine king Vaishravana to deploy their supernatural powers and drain the great lake into a river course. They cut a mountain into two great pieces and move it out of the way so that the lake can drain into a nearby river called the Gyisho, thought to be perhaps the river now known today as the Karakax. It is not very clear, however, where the mythical lake might have been. Was it in the mountains behind the present city, or could it even have been the whole Tarim Basin?

The other sutra (now being translated but not yet ready to publish) is The Questions of Vimalaprabha (Toh 168, Vimalaprabhaparipcccha). In it, the Buddha predicts the rise of Khotan as a dharma country in the century following his parinirvana, commands the gods and bodhisattvas to protect its inhabitants, and for their use pronounces dharanis, (phrases similar to mantras), protective for the land. In particular, one of King Prasenajit’s daughters, Vimalaprabha—a bodhisattva goddess who has deliberately taken this rebirth as the princess in order to receive these instructions—is appointed by the Buddha to take a leading role in guiding and protecting Khotan during several of her future lifetimes as a series of powerful women. The final passage of the sutra describes the Buddha disappearing from Vulture Peak and reappearing in a meditative absorption in Khotan, accompanied by bodhisattvas seated on lotuses floating in the huge lake, each above particular underwater locations where the stūpas and monasteries of the future land will later appear when the lake is drained.

Two further Khotanese texts, The Prophecy of the Arhat Sanghavardhana and The Prophecy Concerning Khotan (Toh 4201 and 4202), are preserved in Tibetan in the Tengyur (placed mysteriously in the Epistles section). Both include summaries of the same lake story.

The founding myths of Khotan find a shared theme with that of another mountainous site, the Kathmandu Valley, also said to have been formed by the draining of a lake. The legend of Kathmandu, in which the sacred hill of Svayambhu plays a pivotal role, is recounted in the various versions of a Newar Buddhist text called the Svayambhu-purana, an anonymous work first composed in the fifteenth or sixteenth centuries but probably based on earlier oral traditions, and developing over time into different versions of increasing length. The myth sets up the landscape as a place intentionally shaped and blessed by no less than seven successive buddhas and is thus deeply meaningful to the Newars of Kathmandu, and of course to the many other Buddhist inhabitants, pilgrims, and visitors who throng the valley and its holy places. The valley is not just a place whose multitude of sites, temples, caves, stupas, ponds, and other memorials are connected haphazardly to details of its history. It is an intentionally created buddhafield, a hidden land revealed as propitious for study, practice, and accomplishment.

The two founding myths don’t just share the overall theme of what is an archetypal land-from-water creation legend found in Asia and cultures throughout the world. A few more specific similarities between them have led scholars both in Tibet and in the West to point out that the two stories are more closely linked.

Both places are sites associated with the seven successive buddhas. A mixture of people from both China and India are said to have been the original human settlers of both newly created valleys, and the Indian settlers in both places are associated with Indian kings. In the Khotan stories, the Emperor Ashoka’s exiled son Kunala is adopted by the king of China, too, before becoming the founding ruler of Khotan, and is referred to by the name “Suckler of the Earth-Breast” (perhaps Gostana in the original, lost Khotanese version); a parallel story is told in the Vamshavali, another Newar text on the founding myth of Kathmandu. The Prophecy Concerning Khotan and the Vamshavali each mention sites called Namobudong and Namobuddha, respectively, where bodhisattvas performed acts of “great giving.” The list of parallels goes on, and perhaps the most convincing is that Goshringa, the name of the hill in Khotan from which the Buddha surveyed and blessed the country, is also said in the Svayambhu-purana to be one of the successive names of the sacred hill of Svayambhu, used in the age before the present one.

The Khotanese texts are many centuries older than the Nepalese, and their details may somehow have ended up being incorporated in the Kathmandu legends. For instance, the very name Khotan seems to have been derived from the names of Kunala or Gostana, the Indian prince; and the mixing of Indian and Chinese populations as the original settlers seems much more descriptive of Khotan than of Nepal. The borrowing of details need not, of course, negate the authenticity of either story. One hypothesis is that the Svayambhu-purana started out simply as a general anthology of Buddhist narratives from elsewhere, but that as more and more details of local founding myths were gradually added, later versions of the text were taken as primarily about those local myths, until the local theme came to be reflected in the text’s very title.

Despite the overlap between these stories, the destinies of the two lands could not be more different. The dharma has survived and flourished in the Kathmandu Valley, despite Nepal’s many problems. But in Khotan it has not. In fact, history has largely forgotten how important this jewel of a country once was. By the twelfth century, little was left of Khotan’s Buddhist past. The power of China had waxed and waned several times. Tibet’s imperial reach had long ago collapsed. The Silk Roads had dwindled in importance. Waves of Turkic and Iranian influence, eventually bringing Islam, had surged through the region. Mongol power was increasing. Many scholars and historians in Tibet seemed already to have become ignorant of Khotan’s contribution to their culture a few centuries earlier. Some were so ill-informed that they were not even sure what country was designated by the Tibetan name for Khotan, Liyül, let alone where it was. Others, familiar perhaps with the legends of Svayambhu, identified the Khotan sutras confidently with Nepal, as evidenced by specific refutations of that notion by early figures like the Kadampa master Drolungpa Lodro Jungne and the great Sakya scholars Sakya Pandita and Rendawa Zhonnu Lodro. In the thirteenth century, Chomden Rikpai Raltri saw the need to specify Liyül as being “on the other side of the Chakpo snow-mountains” and, in another work, to write a couplet on the subject:

This Liyül of “Sustained by the Earth Breast”
Is not the Nepal on the border of India and Tibet.

Even in the twentieth century, the renowned Tibetan traveler and scholar Gendun Chopel (1903–1951) found it necessary to point out to his countrymen that to identify Liyül with Nepal was wrong, and that the features of the country, as mentioned in the Kangyur texts, are those of Khotan.

For people in different places at different times, the availability of the Buddha’s teachings has always depended on geography and history. Geographical barriers to the accessibility of the teachings are more easily overcome in the modern world than they were in earlier times, but historical ones, in the form of cultural and political circumstances, still impose restrictions.

Khotan’s founding myth relates how the buddhas create new opportunities in both time and space for the dharma to be spread, taught, and practiced, but it is also part of a Buddhist literary genre that contemplates the dharma’s inevitable decline. Knowing how the destiny of one’s land is related to the Buddha’s prophetic warnings brings resilience when dangers threaten. Knowing that one’s land is linked to the Buddha’s concern to identify and establish safe havens, where the practice of the dharma will endure, brings comfort and inspiration—as it still does to Buddhists in the Kathmandu valley, and once did to the people of Khotan. Let us honor the memory of Khotan and the magical draining of its lake.

John Canti is Editorial Co-Director of 84000: Translating the Words of the Buddha and has been closely involved in the project since its beginnings twelve years ago. Before that, he was a Fellow of the Tsadra Foundation. He currently lives in the Dordogne, France, has been a practicing Buddhist in the Tibetan tradition since the early seventies, and is a founding member of the Padmakara Translation Group.