We invite you to join us live on Monday, August 1, with the well-respected teacher, Chokyi Nyima Rinpoche who will teach 84000’s publication of The Sūtra of the Wheel of Dharma, on this special occasion of Chökor Düchen. 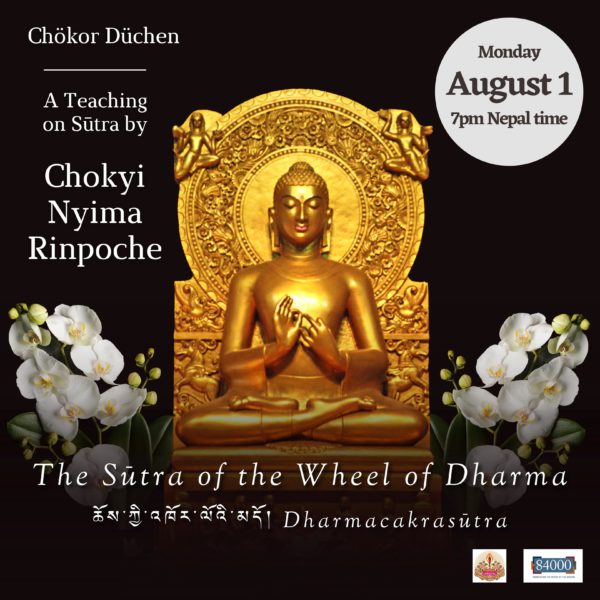 We are honored to have Chokyi Nyima Rinpoche teaching this brief, but classic presentation of the four truths which has remained central to the Buddhist tradition since its very early days.

We encourage you to read this brief but important text ahead of teaching this Chökor Düchen. You’ll find more about Chokyi Nyima Rinpoche and all event details below.

This event is organised in partnership with Shedrub Mandala.

The recording of the teaching is now available at Dharmasun.org. Select the “Heart to Heart Advice” category.

Chokyi Nyima Rinpoche is a renowned teacher and meditation master in the Kagyu and Nyingma traditions of Tibetan Buddhism. He was born in Tibet in 1951 as the oldest son of Tulku Urgyen Rinpoche, an accomplished master of Buddhist meditation.

In 1974, Rinpoche joined his parents in Kathmandu, Nepal, where he assisted them in establishing Ka-Nying Shedrub Ling Monastery. Upon its completion in 1976, H.H. the Karmapa enthroned Chokyi Nyima Rinpoche as the monastery’s abbot, and for over 40 years, Chokyi Nyima Rinpoche has overseen the welfare and spiritual education of almost 500 monks and nuns who primarily reside at Ka-Nying Shedrub Ling Monastery, Asura Cave Retreat Center and Nagi Gompa Hermitage.
Rinpoche established the Rangjung Yeshe Institute for Buddhist Studies (RYI), an international Buddhist college, or “shedra,” which offers an in-depth Buddhist education to international students. RYI has since formed the Center for Buddhist Studies at Kathmandu University, a degree-granting institution for scholarship and academic research that offers BA, MA and PhD degrees in Buddhist Studies and Himalayan Languages.