Planting a Seed for the “Impossible”

At a recent awareness-raising event for 84000, Ding Nai-Chu introduced 84000 with heartfelt words that describe her first visit to Bir, the connection between her daughter’s wedding and 84000, and how she first thought 84000 would be an impossible task to accomplish—even in 100 years. 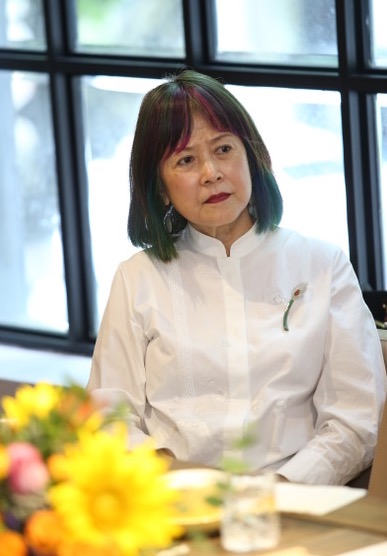 Of all of Dzongsar Khyentse Rinpoche’s many activities, for me personally, the most important project is the one that was born in 2010 from a dream that he had had. He said to us that he really hoped to be able to translate the Buddhist canon into English. I still remember that when I heard this, my head went numb and I felt like I was about to faint. My first response to Rinpoche was, “I’m afraid that this is a project that can’t be completed in even 100 years.”

My impression was that, in the past, it was always the kings who were undertaking translation projects. It was great translators and great realised beings who were undertaking such a project. So when Rinpoche brought up such a project, I thought: How is Rinpoche going to initiate a project as vast as this? At the time, Rinpoche said, “This is indeed a 100-year project. We might not even see the completion of this 100-year project in our lifetime.” But he said, “It is very urgent.”

When Rinpoche brought this up and said that he was going to do this, I saw then the determination and the glimmer in Rinpoche’s eyes. Then I thought to myself, if we have the good fortune of participating in such a noble project, then I must do my utmost.

This was in 2010 when Rinpoche’s aspiration, his dream to translate the Buddhist canon, began to take shape. I did not imagine that in eight years we would have accomplished this much. If we go forward at the current pace, in 25 years the Kangyur can be fully translated into English—I find this to be beyond incredible! I must say it’s beyond incredible.

This project has now spread all over the world. Many great scholars at various universities—from Oxford to Berkeley—these translators, along with accomplished masters, have worked together to get to where we are today. And at any time on the internet, everyone can read the many completed translations. I am deeply honoured and deeply moved that in my lifetime I’ve had the good fortune of being involved in a project like this. It makes me feel like my life is without regrets.

In 2009 Rinpoche held the first sūtra translation meeting in Bir. This left a big impression on me. Let me tell you why. This meeting happened half a month before my daughter’s wedding. I had been to Bir in 1989, very early on. At the time, going to India in 1988 or 1989, you had to get off the plane at New Delhi and drive 14 hours across mountains to reach this tiny little village at the foot of the Himalayas called Bir.

When I went in 1989, it left a big impression on me. From the city, I went with Stan Lai [Nai-Chu’s husband] and we brought our daughter Stephanie. At the time she was only eight or nine. So we brought her, and our family arrived in Bir. In Bir, there was no running water at the time, so all of the water had to come from very far away. I had been there for several days and hadn’t taken a proper shower. And of course, the weather was cold.

After a while, I really needed a shower, needed to wash my hair, needed to wash my clothes. So I asked O. T. [Orgyen Tobgyal] Rinpoche, “Can I have a bucket of water?” Rinpoche said, “Yes, yes.” More than an hour passed and there was still no water, and I was too shy to ask.

Suddenly I saw from afar an old lady carrying a bucket of water, walking down the rugged mountain path. I looked over—that was my water! Never in my life had I felt that water was this precious! I took that water and washed everything clean, bit by bit. I never knew water was that precious. I washed bit by bit and the remaining water lasted for three days. It was very dear.

Before returning to Taipei, we asked O. T. Rinpoche, “Rinpoche, regarding the water, is there any way we can help make getting water more convenient?” He told me that actually there was a water reservoir on the mountain, but there was no pipe. I asked how much a pipe would cost. That was 1989. It cost about thirty thousand US dollars. I returned to Taipei and with a group of friends we got together some money and I wired it over.

In 2009, because of my daughter’s wedding and also Rinpoche’s aspiration of having this meeting [the “Translating the Words of the Buddha” conference], I once again went to Bir. That day I was taking a shower in my daughter’s house, and the running water came just like that. Even though the water pressure is still not like it is in the cities—sometimes it’s not stable, once in a while, the hot water and cold water systems get very unstable—it’s still running water. I suddenly thought of that bucket of water in 1989, and how in 2009 I could actually have this kind of running water.

I think that feeling was very special because back in the day when I fundraised to have that pipe installed, I never thought that one day my daughter would be married in Bir. I definitely never thought that would happen because she was a very naughty child, very obstinate. She’s a completely Westernized kind of girl. How could she possibly one day marry in some remote mountain region? And then I was stunned, you know? I was in that shower room and the tears just fell down.

In 1989 I did this one thing, and in the end, the one who benefited from it is my daughter. Then I thought, I don’t know what type of seed I once planted so that in my youth I could encounter the Buddhadharma. I wanted to share this story with everyone to say that life’s causes and conditions are very vast and complicated. You really never know how that one thing you did at one time might impact yourself and others in the end. It might be your children and grandchildren, it might be anyone.

I recall now that when Rinpoche first spoke of [translating the Buddhist canon into English], I secretly thought that this was an impossible task. Absolutely impossible. We are so short-sighted. But at the time I was extremely moved. At the time Rinpoche said we might not be able to complete this in 100 years. You and I might not be able to see its completion but think of all those to come [who will benefit from this project]. And then there we were in that little mountain region, where I saw great translators from all over the world, some with great knowledge, all of them. [We were] surrounded by this group of people and everyone thought, “Yes!,” we should translate the Buddhist canon so as to benefit more people.

Ding Nai-Chu is one of the most prominent theatre producers in Taiwan and the Chinese-speaking world. She has produced over 50 plays, including classics such as The Night We Became Xiangsheng Comedians, Secret Love in Peach Blossom Land, A Dream Like A Dream and The Village. Ding has produced three films—The Peach Blossom Land, The Red Lotus Society, and Finding Shangri-La—which have received numerous top awards at international festivals. She was founding Vice President of Super TV. A graduate of National Taiwan University majoring in Philosophy, Ding received her M.A. in Education from the University of California, Berkeley. She is currently the managing director of Performance Workshop Theatre, and for years has been a renowned translator of Buddhist teachings.