Facts and figures about Kangyur and Tengyur 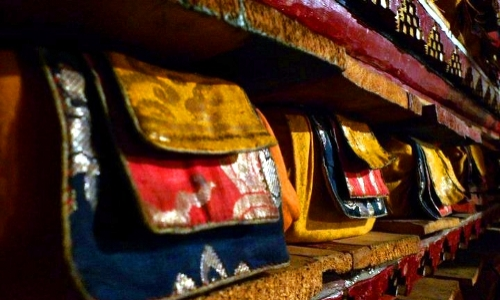 What is the Kangyur?

The meaning of “Kangyur” is “the translated words (of the Buddha)”. It is the entire collection of texts regarded as buddhavacana or “Buddha-word”, translated into Tibetan.

The texts considered to be “Buddha-word” are the records not only of the Buddha’s own discourses, but also of teachings and explanations given by others––often by his close disciples with his approval, or by other enlightened beings. Also included are systematic compilations of the Buddha’s pronouncements on particular topics, e.g. the rules of monastic discipline in the Vinaya texts.

What is the Tengyur?

The meaning of “Tengyur” is “the translated treatises”. It is comprised of the Tibetan translations of works written by Indian Buddhist masters, explaining and elaborating on the words of the Buddha.

What are the source languages of the Kangyur and Tengyur?

Are the Kangyur and Tengyur canonical scriptures, like the Bible and the Koran?

The Buddhist scriptures, unlike those of Judaism, Christianity, or Islam, are not seen as a closed, defined set of sacred revelations granted to humans by a divine being––the usual definition of a “canon”.

However, the texts in the Kangyur and Tengyur (like those in the Chinese and Pali collections) are often described as “canonical” in the sense that they are accorded a special, authoritative status. Their authority and sacredness derives partly from their provenance, but also to a large extent from their perceived transformative power. This second, less formalised aspect helps to explain why the collections (with the exception of the Pali Canon) have not been treated as completely immutable and closed to further additions.

Another difference is that the various genres within the canonical collections are accorded different levels of sacred authority: the sutras (and tantras in some cases) the most, then the vinaya texts, followed by the abhidharma, and the treatises.

How extensive are the Kangyur and Tengyur, and how many texts do they contain?

*One page equals one side of a two-sided folio. Pages are stated in Peking Kangyur and Tengyur pages.

Since no two Kangyur or Tengyur editions are exactly the same (see below), the data above is an estimate of their total cumulative size based on all the texts found in six Kangyurs and four Tengyurs. This data is derived from a special report on Dr. Phillip Stanley’s nearly two decades of research on various editions of Kangyur and Tengyur texts.

What categories of texts are found in the Kangyur and Tengyur?

The genres or categories of texts contained within the Kangyur include:

The genres or categories of texts contained within the Tengyur include:

When were the Kangyur and Tengyur compiled?

The texts were brought to Tibet from India and translated into Tibetan over a long period. The “early period” of translation started in the 7th century, reaching a high point in the 8th and early 9th centuries with a well-developed centralised organisation under royal patronage. There was a break during political upheavals from the mid 9th century, and the “later period” started in the late 10th century.

Multiple copies of the manuscripts of the translated texts were made and kept in different monasteries, but they were not treated as a formalised collection for several centuries. The work of ordering and classifying them into genres began with simple descriptive inventories, and by the early 14th century major efforts were being made to collect copies and compile and edit definitive collections, perhaps inspired by the example of what Chinese scholars had done, as well as in response to the circulation of multiple versions and variations of many texts.

The monasteries of Narthang, Tshal Gungthang, and Zhalu are known to have been active centers of such work in the 14th and 15th centuries, and the great Zhalu scholar and editor Butön (1290-1364) is often credited with an important role in the establishment of the Kangyur and Tengyur in something like its present form. The introduction of xylogaph printing from China in the early 15th century made it easier to standardise the collections, but different editions of both Kangyur and Tengyur continued nevertheless to appear in different regions of Tibet, and new translations as well as newly discovered texts considered “canonical” were still being added in the nineteenth century.

Are there many versions of the Kangyur and Tengyur?

Yes, there are many versions of the Kangyur and Tengyur, both manuscript and blockprint, that still exist or are known to have existed. These different versions or “editions”, produced over the centuries in different parts of Tibet, though broadly similar in content, vary in the exact list of texts included, in the order in which the texts and genres are arranged, and in textual details within the texts. Another major area of difference was which sets of tantras were included, this being an issue of strongly held sectarian preferences.

The initial compilation work at the monastery of Narthang in the early 14th century produced a manuscript collection, probably containing multiple copies of some texts, now known as the “Old Narthang”, which no longer exists. However, copies made from this common source were taken to different parts of Tibet and evolved into two slightly different branches or “traditions”, the “eastern” branch being known as the Tshalpa and the “western” later giving rise to the manuscript version known as the Thempangma.

The Tshalpa version of the Kangyur was the product of substantial revision and reorganisation of the texts, as well as the addition of three volumes of tantras from the early translation period. It was the basis for the first woodblock printing, the Yonglé edition, made in China under the Ming dynasty emperor Yonglé in 1410.

As printing technology spread, a number of different woodblock editions were printed, some in China and some in Tibet, all based on the Tshalpa tradition: the Wanli, Lithang and Kangxi editions in the 17th century, and the Choné and Quianlong in the 18th century.

Other regional woodblock editions made from the 18th century onwards, although still based on the Tshalpa tradition, included varying amounts of cross-input from the Thempangma lineage. These are the Narthang, Degé, Urga and Lhasa editions.

The original Thempangma manuscript, made in 1431 and kept in Gyantse, may still exist but has not been identified. Over the centuries many copies were made, one of which is in the Mongolian State Library in Ulan Bator, and another in Tokyo; the manuscript Kangyur in London is a copy of a copy, as is the Stok Palace Kangyur from Leh, Ladakh. The Thempangma tradition did not directly give rise to any printed editions.

There are a few local manuscript Kangyurs which were produced independently of the two lineages derived from the “Old Narthang”: the Bathang, Mustang, Phukdrak and Tawang Kangyurs.

Which editions are the most reliable?

The Thempangma manuscript is considered more reliable than the Tshalpa and other versions in many respects, but many of its better features were incorporated into the later printed versions. It is generally accepted that, overall, the most reliable version of the Kangyur is the Degé collection, printed in the 18th century at the Degé Printery, under the patronage of the Tenpa Tsering, ruler of the Degé Principality, and the editorship of Situ Panchen Chökyi Jungne. A large number of new translations were added by Situ Panchen’s successor, Shuchen Tsultrim Rinchen. Shuchen’s Degé Kangyur, known as the post-Parphu, is the Degé Kangyur that is printed today.

For the Tengyur, most scholars regard the 18th century Degé edition as the most reliable, followed by the “Golden” Qing dynasty Peking edition. Other blockprint editions are those of Narthang, Choné, and Mongolia.

What versions are available today, and where?

Many monastery and university libraries have printed copies of the Kangyur and Tengyur; the Degé versions are probably the most widespread.

For most people, it is easiest to consult the collections online, and the Tibetan Buddhist Resource Centre site currently provides outlines and full-text views of the Degé, Stok Palace, Lhasa, Urga, and Narthang Kangyurs, and the Degé, Golden, Narthang and Choné Tengyurs.

A version of the Kangyur and Tengyur, the Nyingma Edition, was published in the US and distributed to institutions world-wide in 1977-1983. It is based mainly on the Degé versions and accompanied by a useful 8-volume research catalogue and bibliography.

A remarkable recent edition of the whole of the Kangyur and Tengyur, published by the Ka-ten Pe-dur Khang in China (and sometimes referred to as the “Pedurma” or “comparative edition”), is based on the Degé versions but notes and lists all the text variants in seven other different versions of the Kangyur (the Yonglé, Lithang, Kangxi, Chone, Narthang, Urga, and Lhasa editions) and three other versions of the Tengyur (the Beijing, Narthang, and Choné editions).