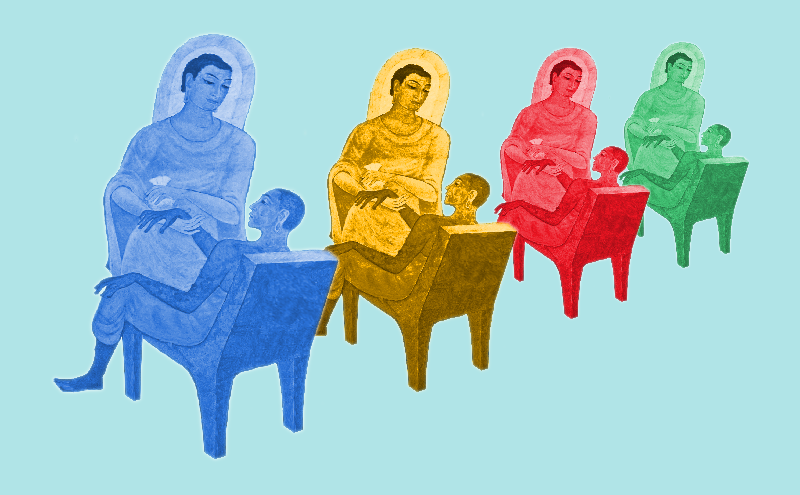 As people around the world entered into successive waves of Coronavirus-induced uncertainty and sufferings, we had many of our friends and followers asking us for inspiring content to help get us through this challenging time of distancing, quarantines, and lockdowns. We are now excited to share with you a new project!

Our editorial team has fast-tracked the translation and publication of short sūtras traditionally recited for resilience and wellbeing, and we are bringing them together here as “Sūtras for Wellbeing.” This series shares the stories behind these beautiful texts and the mantras within them that have traditionally focused minds in times of uncertainty. In such difficult times as many of us face today, remaining cognizant of the fact that all things will pass, may well be one source of resilience and wellbeing.

To kickstart our Coronavirus quarantine series, Sūtras for Wellbeing, we announced the publication of “On Entering the City of Vaiśālī,” a short sūtra set during a time when an epidemic was ravaging the ancient Licchavi city of Vaiśālī. This sūtra is one of many that are traditionally recited by Tibetan Buddhists for resilience and wellbeing during times of adversity.

The summary of this text from our publication in the Reading Room reads:

Invited to visit the city of Vaiśālī, which has been ravaged by a terrible epidemic, the Buddha instructs Ānanda to stand at the city’s gate and recite a proclamation, a long mantra, and some verses that powerfully evoke spiritual well-being. Ānanda does so, and the epidemic comes to an end. One of the mahāsūtras related to the literature of the Vinaya, this text, like other accounts of the incident, has traditionally been recited during times of personal or collective illness, bereavement, and other difficulties.

The second episode in our series is comprised of two dedications: The Dedication “Fulfilling All Aspirations” and The Dedication “Protecting All Beings.” These two dedications contain beautiful and inspiring prayers that are very closely related, and in many ways form a pair. Interestingly, while working on the text, our editors believe that The Dedication “Protecting All Beings” appears to contain the Kangyur’s only explicit articulation of the paradigmatic aspiration of mind-training–the wish that the suffering of others instead “ripen for me”–later popular in the Tibetan mind-training (blo-sbyong) teachings. We’ll return to this later, but for the timebeing, there is something incredibly soothing about making these aspirations for the benefit of all sentient beings, so read the texts here and here, and stay tuned for more on these two rediscovered gems from the Kangyur!

We are humbled to share here both a recitation in Tibetan by our Founding Chair, Dzongsar Khyentse Rinpoche, as well as a recitation in English to help those unsure of where or how to begin.

So open the text in our Reading Room, and recite along!

The second episode in our Sūtras for Wellbeing series focuses on two closely related, and recently published texts: The Dedication “Fulfilling All Aspirations” and The Dedication “Protecting All Beings.” And today, we are thrilled to share with you both Tibetan and English readings of these texts by two widely respected teachers of the Tibetan Buddhist tradition: Jigme Khyentse Rinpoche (English) and Pema Wangyal Rinpoche (Tibetan).
Open the texts in our online Reading Room, and follow along with the audio in the station above!
84000 · Sūtras for Wellbeing

#1: The Stories behind “On Entering the City of Vaiśālī

If you didn’t catch our IGTV video, you can still watch 84000’s Editorial Co-Director, Dr. John Canti, sharing the stories behind the significance and symbolism of the Mahasūtra “On Entering the City of Vaiśālī:”

Dr. John Canti studied medicine and anthropology at Cambridge University (UK) and qualified as a doctor in 1975. While still a medical student he met and began to study with some of the great Tibetan Buddhist masters of the older generation, especially Kangyur Rinpoche, Dudjom Rinpoche, and Dilgo Khyentse Rinpoche. After some years of medical work in northeastern Nepal in the late 1970s he went to the Dordogne, France, to complete two three-year retreats at Chanteloube, and has remained primarily based there ever since.

John is a founding member of the Padmakara Translation Group, was a Tsadra Foundation Fellow from 2001-2012, and was awarded the 2016 Khyentse Foundation Fellowship. In 2009, when 84000 first started, he was appointed Editorial Chair of 84000, and in 2020 has become Editorial Co-Director. His interest in the Kangyur and Tengyur has continued to grow as the project has taken shape, and he feels more and more fascinated by their origins and history, their range of content, and above all by the significance of the extraordinary body of literature the two collections have preserved.