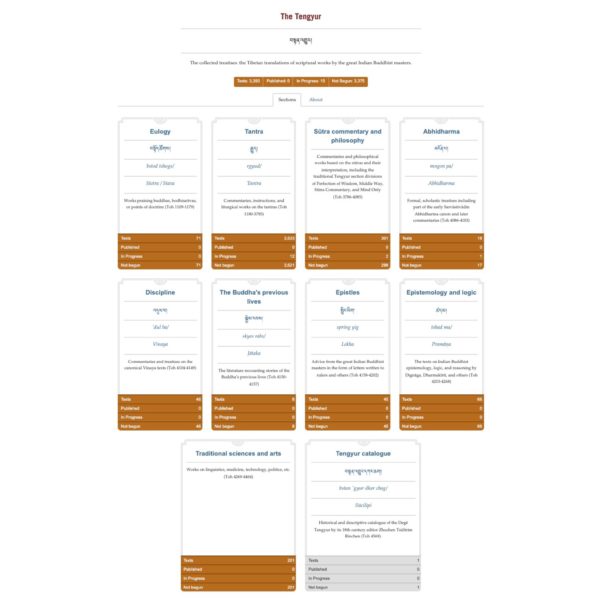 A screenshot from the homepage of the Tengyur catalog

84000: Translating the Words of the Buddha (84000.co), a global nonprofit initiative to translate and make freely available the 231,000 pages of the Tibetan Buddhist Canon, proudly announces the English-speaking world’s first complete catalog of the collected treatises—the Tibetan translations of works by the great Indian Buddhist masters explaining and elaborating on the words of the Buddha—known as the Tengyur.

All 3,400 titles of the texts in the 161,800-page Tengyur, subdivided by genre, are set out in Sanskrit and Tibetan and have been translated into English. The catalog also attributes each text to the Indian authors who wrote the originals, as well as to the translators who translated them into Tibetan between the ninth and fourteenth centuries. All this catalog information now joins the existing Kangyur catalog in the publicly accessible 84000 online Reading Room.

The Tengyur, or ‘translated treatises,’ is the huge collection of works by the great scholars of the golden age of Indian Buddhism, preserved in Tibetan translation even though many of the original Indic texts have been lost.

“These works cover a vast range of knowledge. Some of the best known are commentaries and philosophical works based on the sūtras and tantras, but there are texts on practically everything—from monasticism to medicine, liturgy to linguistics, and politics to poetics,” says John Canti, editorial co-director for 84000. “For anyone interested in exploring the full background and implications of Buddhist thought and practice, the Tengyur is an inexhaustible resource—but until now even its contents list has only been available to specialist scholars with the right language skills. Just to skim these titles in the Reading Room gives a fascinating glimpse of what there is in the Tengyur to be explored.”

The traditional Tengyur section divisions include the commentaries on the Perfection of Wisdom sūtras; the treatises by Nāgārjuna, Āryadeva, Candrakīrti, Buddhapālita, Śāntideva, and other Indian masters on the Madhyamaka (Middle Way) philosophical system; the treatises by Maitreya, Asaṅga, Vasubandhu, and others on Yogācāra-Cittamātra themes, buddha-nature, and other topics.

The Tengyur also includes important commentaries and treatises on the canonical Vinaya texts, parts of the early Sarvāstivādin Abhidharma canon and the treatises and commentaries on it; texts on Indian Buddhist epistemology, logic, and reasoning by Dignāga, Dharmakīrti, and others; a collection of texts in the form of verses of praise; a very extensive section on tantric thought and practice with many subdivisions corresponding to the different levels of tantra; advice from the great Indian Buddhist masters in the form of letters written to rulers; the literature recounting stories of the Buddha’s previous lives known as Jātaka; and sections on the traditional sciences, including medicine, linguistics, the arts, technology, and even politics.

“When people think about Buddhism with its various philosophies and complex meditative practices, the references for many of those ideas are the texts found in the Tengyur, and yet so many of those texts remain unexplored for the most part,” shares Dr. Paul Hackett, who worked on this project as a translator for 84000, and who has spent the better part of the past three decades studying Buddhist canonical literature. “Thus, 84000 has done an immense service not only to Buddhist scholars and practitioners around the globe, but also to the general public in the English-speaking world by enabling and encouraging them to begin to appreciate this collection and its place within the global history of ideas within our shared human civilization.”

84000’s interactive Reading Room, visited by people worldwide over 40,000 times a month, is already a leading source of accurate and nuanced translations of the words of the Buddha for scholars, students, and practitioners, used in the teaching of Buddhist Studies in schools and universities, and both used and recommended by Tibetan Buddhist teachers of the living tradition.

While in 2009, it had been estimated that only five percent of the Tibetan Buddhist Canon—comprised of the Kangyur and the Tengyur—had ever been translated into a language spoken today, 84000 has raised that figure to twelve percent in just over a decade. The organization is on track to reach its 2035 target for the complete translation and publication of the Kangyur’s 70,000 pages. The remaining 75 years of this one-hundred-year project will be dedicated to the complete translation and online publication of the 161,800 pages of the Tengyur.

Read more about the urgency behind our work.

84000 is a global nonprofit initiative to translate all 231,000 pages of the Buddha’s words from the Tibetan Buddhist Canon and make them available in English, for free, often for the first time ever.

As a grants-based translation project and online publication house, we leverage and integrate new technologies to make our digital library of the Buddha’s wisdom as accessible and beneficial as possible to readers, practitioners, and scholars around the world. Our work relies upon the dedicated and collaborative effort of scholars, professionals, volunteers, advisors, and sponsors around the world, working remotely and online, across continents. Together we translate for preservation and engage through open access for the benefit of all sentient beings.