Resounding Wisdom around the World

Last month, over Saga Dawa, we heard words that had been passed down orally for decades and committed to paper—or to palmleaf—over two thousand years ago, brought to life again as they were resounded around the world in English, Tibetan, and Chinese! 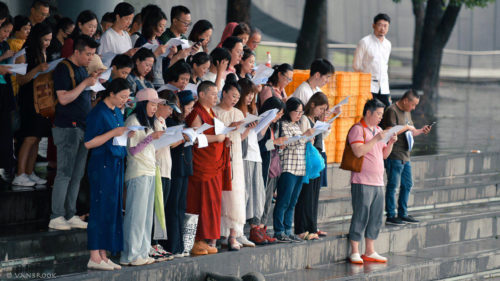 Saga Dawa is the Tibetan name for the auspicious lunar month that contains the anniversaries of the Buddha Shakyamuni’s birth, enlightenment, and parinirvana, making it perhaps the most important of months in a Buddhist’s calendar. This year, the birthday of 84000’s Founding Chair, Dzongsar Khyentse Rinpoche, coincided with its final days. As 84000 is in the business of both preserving wisdom and making it more easily accessible to all, it seemed only natural that a three day global sūtra resounding was the best way to celebrate both the source of these wisdom words, and their continued teaching in the modern world.

From day one, we were incredibly humbled and touched to see the outpouring of support, and the growing, global community of friends and supporters 84000 has gained.

We would like to extend our heartfelt thanks to the over 5,900 of you who participated in our Saga Dawa Resounding 2019. We clocked pledges to resound from Angola, Colombia, Chile, Greece, Russia, Australia, and 40 other countries and regions around the world!

In eastern Bhutan, organizers used the opportunity to update their communities with 84000’s progress, and to kindly collect donations. In Crestone, Colorado, a group of 32 gathered to resound together followed by a good cup of chai. And from China, we received beautiful images of resoundings over the three days.
However, perhaps the most touching response came in the written form, from one resounder in Europe:

“I wanted to send you a private message of sincere gratitude for the work you do. I’m resounding by the bedside of someone who is dying. Your translation is incredible. It’s beyond amazing to be able to read it aloud in English. Thank you.”

We have also received requests, from participants who so appreciated the dedicated opportunity to simply sit and read the sūtras, to hold more such resoundings, and we are excited to begin exploring how we can make these events and experiences of most benefit and fun for our readers, supporters, and friends. However, in times when tastes and ideologies change so quickly, and attention spans seem to decrease by the decade, these sorts of request encourage us with the reminder that wisdom, if given a chance, never goes out of style.

As we aspire to engage the next generation more in the fruits of our labor, we were encouraged to hear that in Singapore, an eight year old took pleasure in resounding The Jewel Cloud at Changi International Airport while she waited, marking the second 84000 resounding she’s participated in already! Inspired, we reached out over social media to ask how we could better involve the younger generation, and received some great suggestions.

Illustrative of all this are those of you who answered our call on social media to share and send in images of your resounding, be it individual or a group practice. These photos came pouring in from Sarnath (the site of the Buddha’s first teaching) and Borobudur (Indonesia), and from Chile to Australia, and almost everywhere in between.

It seems a shame that we were not able to share with you, at the time, all the images we received, so we’ve compiled some of them here.