The Sūtra on Dependent Arising

84000’s most recent translation, The Sūtra on Dependent Arising, discusses the Buddhist doctrine of the dependent arising of conditioned phenomena. This concept is considered by many Buddhists to be the essence of the teaching, the Dharma. Dependent arising is often presented, sometimes through detailed imagery, as a series of 12 links (nidāna) of causes and effects that begins with ignorance and ends with death. 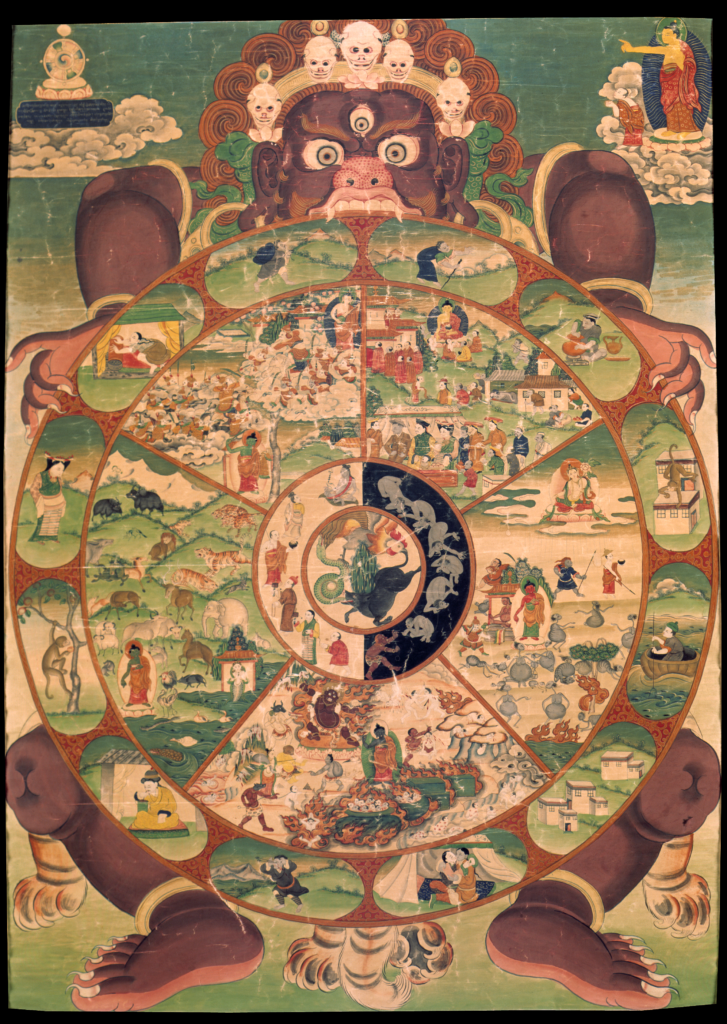 The Wheel of Existence, from Tibet, early 20th century, pigment ink on fabric. Image courtesy of the Rubin Museum.

Painted images of the “Wheel of Life” or “Wheel of Cyclic Existence” are often found as murals or thangkas (paintings on cloth) in Indo-Tibetan Buddhist monasteries and centers, used as aids for the teaching of the Buddhist worldview to both common lay folk as well as monastics. The outer rim of the Wheel offers pictorial representations of the 12 links, beginning with the image of the blind man in the one o’clock position under the left fang of the “demon” of impermanence. Below is a list of the different links and a description of their corresponding representations in traditional art.

Pointing to the complexity and profundity of the Buddhist view of cause and effect, the twelve links of dependent arising outline the sequential process that leads to rebirth (of thoughts, habit patterns, or body). While there are subtle differences in interpretation, the teaching of dependent arising is considered foundational by all schools of Buddhism.

The importance of dependent arising in the Mahāyāna is revealed in the The Sūtra on Dependent Arising, according to Casey Kemp, one of the lead translators of the text. “This sūtra emphasizes the importance of dependent arising within the context of the Mahāyāna path. Sometimes people can forget that the very foundation of the teachings of all the vehicles (and traditions) is dependent arising, including the teachings of no-self, impermanence, emptiness, and even the possibility of buddhahood.”

Underlining her observation of the importance of the teaching within the Mahāyāna, Kemp offers a quotation from the sūtra: “This dependent arising is the dharmakāya of all the tathāgatas. A person who sees dependent arising sees the Tathāgata.”

Furthermore, Kemp notes that the sūtra must have been important in Tibet since it is found at least five times in various forms in the Kangyur.

As Kemp relates, “Many scholars and Buddhist followers have heard the story of the classic statement of dependent arising being spoken to Śāriputra by Aśvajit, an early disciple of the Buddha who was summarizing his teachings. However, this particular account, in which the same statement is taught to Avalokiteśvara by the Buddha himself, is not as well-known. The fact that this sūtra is imparted in a god realm to a bodhisattva again highlights the fact that dependent arising is a teaching shared by the Mahāyāna.”

Another notable feature of the sūtra is that it outlines the importance of imprinting the dhāraṇī on images, sculptures, or stūpas. Kemp offers, “Especially within the context of Mahāyāna, Buddhist scripture itself came to be considered an embodiment or relic of the Buddha, and in this sūtra the Buddha explains how one will accumulate great merit by reproducing the scripture of this essential teaching on objects and thus making them sacred, even if it is only impressed on ‘a stūpa the size of a gooseberry fruit.’” 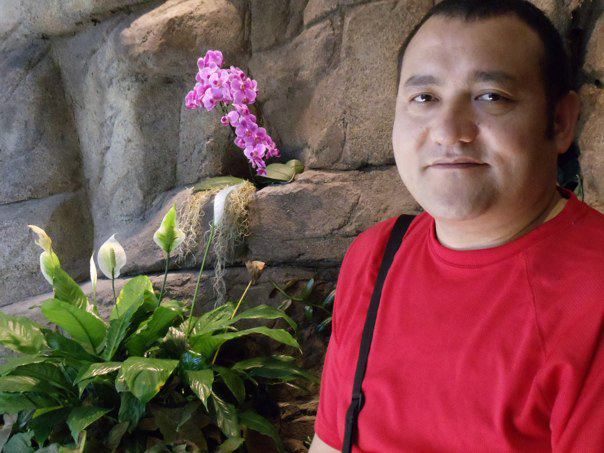 This translation of The Sūtra on Dependent Arising took months to complete by the Buddhavacana Translation Group, Vienna, under the supervision of Khenpo Konchok Tamphel. Rolf Scheuermann and Casey Kemp, with the aid of Tom Tillemans, led the effort to translate the sūtra into English. Kemp had the following to say about the translation process: “It was an incredible experience. This was one of the first sūtras I helped to translate, and I learned so much about the complex nature of translation methods and nuances from working with my co-translator Rolf Scheuermann and consulting with our Tibetan-language expert Khenpo Konchok Tamphel at the University of Vienna.

“I was also fortunate to have the chance to go over this translation and its introduction in detail with Professor Tom Tillemans (84000 Editor in Chief). Professor Tillemans’ knowledge of Buddhist philosophy, literature, as well as Sanskrit and Tibetan language, is extremely vast, and he continues to help ensure the professional quality of translations for 84000. Working with Professor Tillemans directly on this sūtra was a major learning experience for me. He was very generous with his time and expertise, and he taught me how to produce professional, thoughtful, well-researched, and readable Buddhist canonical translations. In particular, we spent quite a bit of time working on the dhāraṇī together in order to provide an English rendering that accurately reflected the Sanskrit:

All phenomena that arise from causes,
The Tathāgata has taught their cause,
And that which is their cessation;
Thus has proclaimed the Great Renunciant.” 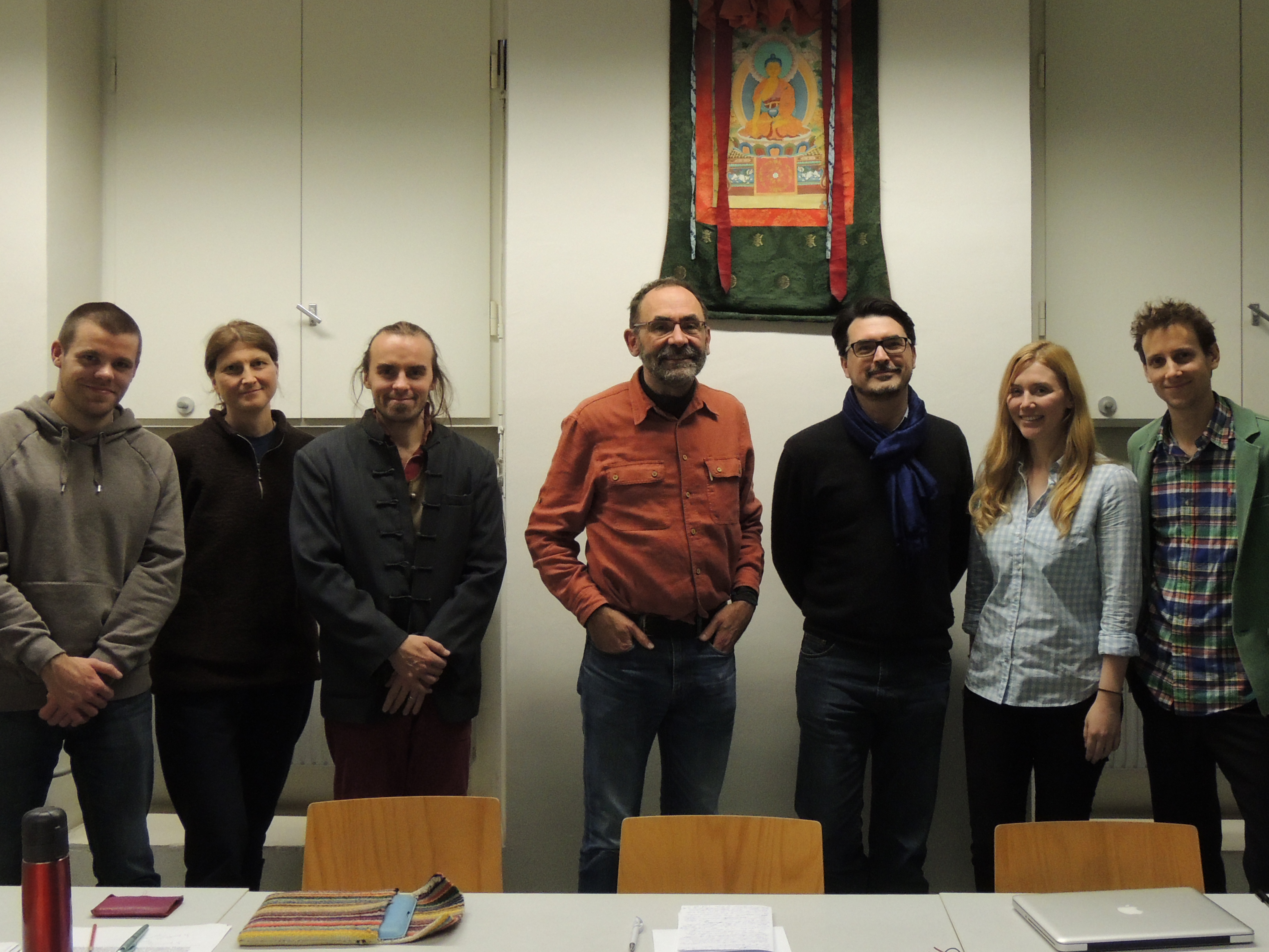 Professor Tom Tillemans with Buddhavacana translation team members and Buddhist translators at the University of Vienna.

For more on The Sūtra on Dependent Arising and other sūtras, translator features, and other interesting information relating to the translation of the Tibetan canon, please visit the 84000 Reading Room and sign up for our mailing list to receive quarterly newsletters.