We live in a time when the Buddhadharma hangs by a thin thread… Many masters, both learned and realized, are no longer alive. When thinking of this I feel a deep loss and sadness. 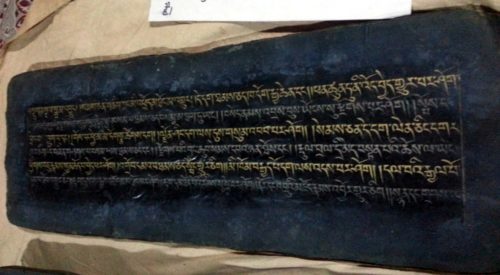 Why is Our Work Urgent?

The two Tibetan collections, the Kangyur and Tengyur, contain more than 5,200 texts in 325 volumes. The approximately 230,000 pages are so large in number that the translations completed to date are just a small fraction of what remains to be translated. Additionally, there are some 2,200 classical Chinese canonical texts in 55 massive volumes.

In the case of the Tibetan texts, to date most of the efforts made by translators, scholars and teachers have gone into works that belong to the non-canonical, indigenous literature of each lineage that are the traditional basis for study. It is therefore critical to strengthen the attention given to the works in the Kangyur and Tengyur, which are the primary source of all the Tibetan lineages, and an important heritage to be shared with Buddhists everywhere.

Oral lineages of detailed understanding and spiritual practice based on these texts have endured for centuries in traditional Buddhist cultures throughout Asia.

Because of the enormous social, cultural and political upheavals of the last hundred years, very few people alive today have received the long and intense education, training and study necessary to understand and interpret the texts. For some texts, the oral interpretive tradition has already been lost.

The number of such scholars and masters is ever dwindling, and it is vital that their unique knowledge of the texts, and of the classical languages in which they are written, be supported in the work of translation.

Classical Tibetan is a language of the Tibeto-Burman family, related to other languages of the Himalayan region (and perhaps, very distantly, to Chinese). While the language itself is unrelated to Sanskrit or any other Indic languages, its written script, based on an Indian prototype, was developed in the seventh century for the purpose of translating the sacred Buddhist texts brought to Tibet from India.

The number of people who learn, understand and use classical Tibetan is rapidly declining. Translation serves the dual benefit of uncovering the timeless wisdom recorded within these texts and spurs greater interest in this ancient language.

The past few decades have seen a steadily burgeoning interest in the study and practice of Buddhism in the West, as well as a resurgence of interest in some Asian societies that are traditionally associated with Buddhism. Many people find it difficult to deepen their studies or practice because of the lack of Buddhist texts available in languages that they can comprehend.

The world saw the destruction of thousands Sanskrit works during the political upheavals in India between the 11th and 13th centuries. But the majority of them had been translated into classical Chinese and Tibetan, in which they were preserved until modern times. The upheavals in China and Tibet during the 20th century came perilously close to a second catastrophic destruction; fortunately, much of the literary heritage, including the canonical works, survived.

Today, it is in our hands to protect these endangered texts from further losses, and to safeguard this precious legacy for future generations.

Many of the texts in the Tibetan Buddhist collections no longer exist in any other language. Once they are translated, these texts will complement the Pali Canon and Chinese Tripitaka to form the broadest possible base of Buddhist textual collections.

These collections will serve as an important foundation for comparative research across the three main existing schools of Buddhism––Theravada, Mahayana and Vajrayana.

New insight into the evolution of Buddhist philosophies and narratives over the centuries and across different cultures will be revealed, benefiting both the secular––the academic researchers and general public; and the religious––Buddhist teachers, students and practitioners.

Over the centuries, translation has played a crucial role in the survival and revival of Buddhism.

Buddhist traditions that still exist in some parts of the world, such as Japan, China, Korea, Tibet, Bhutan, Thailand, Sri Lanka and Burma, have survived in large part because our ancestors compiled and translated many of the original texts into their own languages.

The first collections of the Buddhist texts were compiled in Pali and Sanskrit. The Pali texts were taken to Sri Lanka and survived; most of the Sanskrit texts were lost in the Muslim invasions that destroyed the Buddhist culture of northern India between the 11th and 13th centuries. Fortunately, by then, most of the texts had already been translated into classical Chinese and Tibetan, to which we now have access.

The three major collections of sacred Buddhist texts that have survived are:

The classical Chinese translations started in the first century when Chinese pioneers and Indian scholars began to introduce Buddhism to China. The classical Tibetan translations followed later during the unparalleled state-sponsored cultural transfer of the Buddhist teachings into Tibet from the eighth century onwards.

The Tibetan collection contains a large number of texts not found in the Chinese canon, particularly tantras, and there are some Chinese texts that do not exist in Tibetan.

To ensure the continued survival and availability of these profound and timeless texts, they need to be translated into modern languages, and made globally accessible through online publication.