Hear what others are saying and sharing about 84000

The global non-profit initiative 84000: Translating the Words of the Buddha, founded by the renowned Bhutanese lama, author, and filmmaker Dzongsar Jamyang Khyentse Rinpoche, has published a special, freely downloadable edition of the classic Buddhist sutra The Hundred Deeds. Originally translated by 84000’s editorial team and made available for the first time in English in early 2020, this special edition of the sutra is accompanied by a series of illustrations shared by children from around the world during COVID-19 lockdown, as part of a Dharmic collaboration that 84000 hopes will offer a sense of hope during the ongoing pandemic with an emphasis on a profound message: that simple deeds often have outsized consequences. 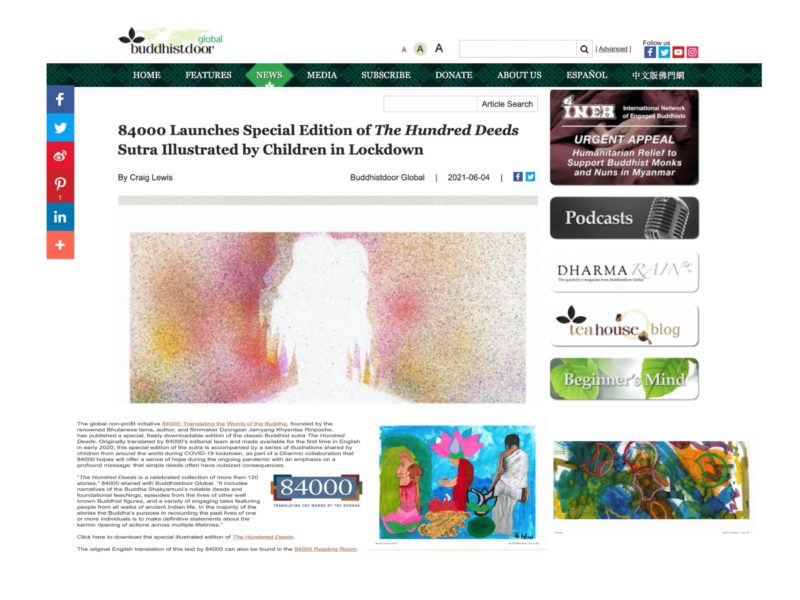 On May 26, 84000, a California-based non-profit dedicated to translating the Tibetan Buddhist Canon into modern languages, released a freely downloadable special edition of The Hundred Deeds sutra. While 84000’s English translation of The Hundred Deeds was first published in February 2020, the special edition includes illustrations from children around the world who participated in #The100Deeds project—a collaborative effort to engage with the sutra’s 120-plus short stories and share its timeless lessons on resilience, empathy, and karmic responsibility. 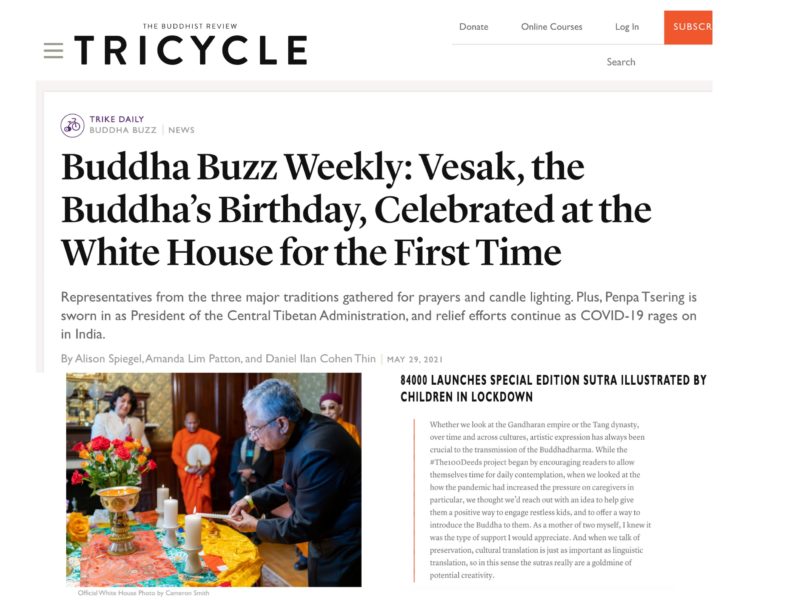 On the occasion of the Lunar New Year, the global nonprofit 84000: Translating the Words of the Buddha is announcing publication of a new translation of an important sūtra known as The Application of Mindfulness of the Sacred Dharma. This scripture, one of the longest texts of the Tibetan Buddhist Canon, has never before been made fully available in English. 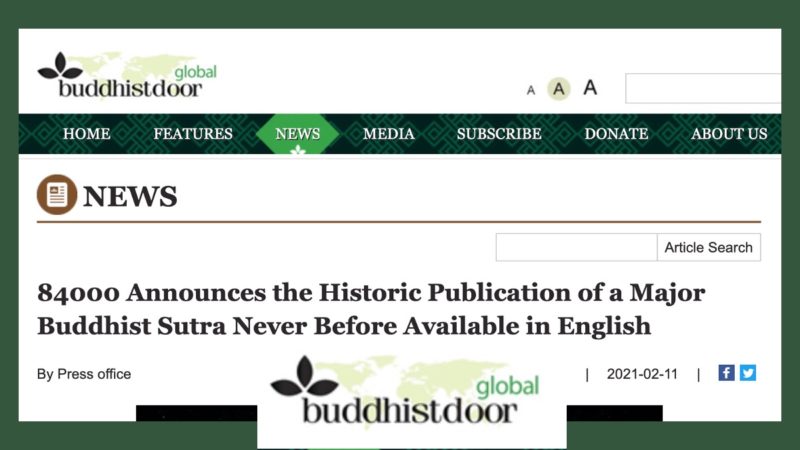 Buddha translation from ancient Tibetan to English a 100-year task, say volunteers and scholars 10 years into the job

“The work may not be economically productive, but we humans really need meaning as well as material prosperity, and it is becoming obvious that the systems of ethics and morality that underpin society, and more broadly our goals and aspirations, badly need basic rethinking.” 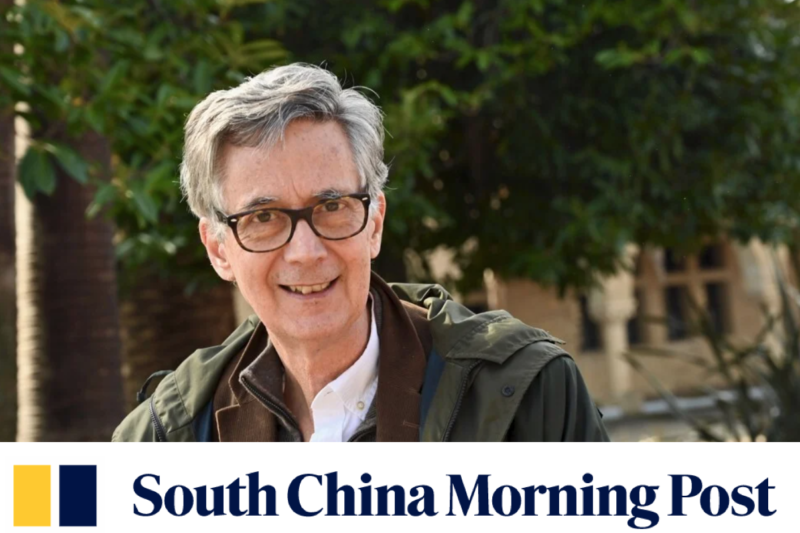 The graphic designer Milton Glaser died on June 26th, on his 91st birthday. Glaser’s work is famous: everybody knows, for example, his “I ♥ NY” logo, or maybe his poster of Bob Dylan, or his work as co-founder of New York magazine.Lesser known, though, are his contributions to the visual presentation of Buddhism in the modern era. 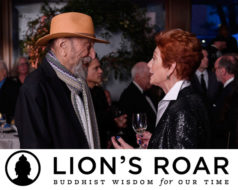 Global non-profit initiative 84000: Translating the Words of the Buddha has reached a major landmark of 10 years of intensive scholarship, translating and preserving the sacred Tibetan Buddhist Canon. To celebrate the occasion and to raise awareness of the profound significance of this ongoing mission, 84000 is today launching a video and social media campaign featuring the voices of Chinese singer-songwriter Leah Dou and British actress Joanna Lumley. 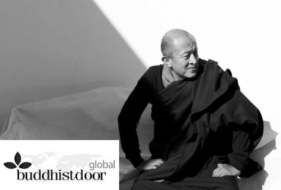 Spoken by the bodhisattva Maitreya, the Rice Seedling Sutra is one of the most important Buddhist sutras on the topic of dependent arising, the basic Buddhist doctrine that everything depends on something else for its existence. Introduction by Rory Lindsay, editor at 84000. 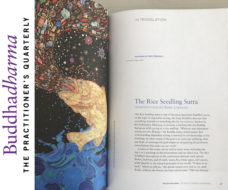 The Words of the Buddha in the Palm of Your Hands

How an idea sparked off the greatest Buddhist project in modern history… A similar project of this weight took place in Tibet in the 8th century, more than 1,000 years ago, when King Trisong Duetsen launched the translation of the Buddha’s teachings from Sanskrit to Tibetan. It set in motion one of the greatest cultural exchanges the world had ever known at the time, or since.

What’s in a Word? The trials of a major effort to translate Tibetan scripture into English

Terminology. Syntax. Diction. All words likely to send my mind wandering. And yet there I was, at the conference of 84000: Translating the Words of Buddha, in Bodhgaya, India, in a room full of high lamas and scholars who were convening to determine how to transmit Mahayana teachings to the world. It wasn’t just important. It was fascinating. 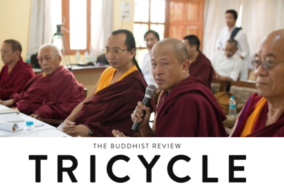 On Saga Dawa Duchen, our board member, Erik Pema Kunsang, gave a heartfelt and inspiring talk on how the Buddhist sūtras have defined his life’s path and how much there is for us to learn from them. Erik’s emphasis on how even a single wish can have an outsized impact on our futures and his subsequent advice for us to try to act like bodhisattvas with the right intention, was fortified by the poignant reminder that no amount of wealth in the world can buy wisdom.

Commemorating the anniversary of Buddha’s birth – and our tenth anniversary translating his words into modern languages – our Founding Chair, Dzongsar Khyentse Rinpoche, teaches one of our recently published sūtras, The Miraculous Play of Mañjuśrī. This teaching is in three parts.

Saga Dawa 2020 | A Live Twenty-Four Hour Recitation of The Dedication: Fulfilling All Aspirations

In celebration of Saga Dawa, the birthday of our Founding Chair, and our own tenth anniversary, we held a twenty-four hour live event reciting a recently published text set to music by composer Harry Einhorn, and beautifully produced by Sophie Perks. (2020)

Artist DALeast on Illustrating The Teaching of Vimalakīrti

Usually DALeast’s mesmerizing murals can be found on the sides of buildings and the walls of cities such as New York, Berlin, and Capetown. Hear him speak about expression, street art, and how he began illustrating one of our publications! (2018)

In this short video, Mingyur Rinpoche shares his joy for 84000’s progress, emphasizes three points of importance, and give thanks to all involved… including to our readers! (2016)

For more videos from 84000, please visit our YouTube channel.

Words from our Founding Chair

A Message to Translators

Dzongsar Khyentse Rinpoche pays tribute to Dharma translators and emphasizes on the importance of motivation (2014).

The Significance of Sūtra Resounding Under the Bodhi Tree

A first-of-its-kind online gathering – of 800 people from over 30 countries – to resound the words of the Buddha begins with opening remarks by Dzongsar Khyentse Rinpoche (2015).

Dr. John Canti, 84000 editorial co-director, speaks in conversation with Joie Chen, PhD candidate, Buddhist Studies (Harvard University). This is the third part of a three-part conversation series that explores the Tibetan Buddhist Canon, how it came to be, and the many treasures that remain to be discovered.

Dr. John Canti, 84000 editorial co-director, speaks in conversation with Joie Chen, PhD candidate, Buddhist Studies (Harvard University). Over the course of one hour, Dr. Canti places the Kangyur in geographical and historical context, and explains how the Buddhist scriptures found their way to Tibet.

Seminars: Advice from the Tradition (2014)

84000 held a three-day seminar hosting senior scholars from the four schools of Tibetan
Buddhism to discuss the complex issues of translating Tibetan Buddhist texts into English.
This seminar was the first of a series aimed at engaging senior scholars in 84000’s translation and editorial process in order to promote a meaningful exchange between senior scholars, translators and editors on tough issues that arise when translating canonical material.

Sounds of the Buddha

Hearing the words of the Buddha spoken, chanted, or sung aloud can be an inspiring experience for many, especially for those with impaired vision.

Though we are in the nascent phases of exploring how to increase audio accessibility to this wisdom, we nonetheless hope you enjoy the existing offerings on our Soundcloud station.